So I wanted to write an article about grinding my own hamburger meat, I wanted to tell everyone you can save money doing this, the meat quality is better, and it is easy to do.  My experience fell short in some areas on this.  Now, in our economy I am always looking for creative ways to save on my grocery bill without having to sacrifice anything. In fact I take great pleasure in trying to hone my skills at creating recipes that are less expensive, and taste just as good if not better than their restaurant counterparts.  I must say I did accomplish my first goal, I purchased about 10 pounds of chuck roast for 1.97 a pound or so.  Ground chuck was running around 2.59 a pound.  My first goal was achieved, I had about a 20% savings pound for pound.  I also had to somehow justify purchasing my grinder attachment for my mixer. 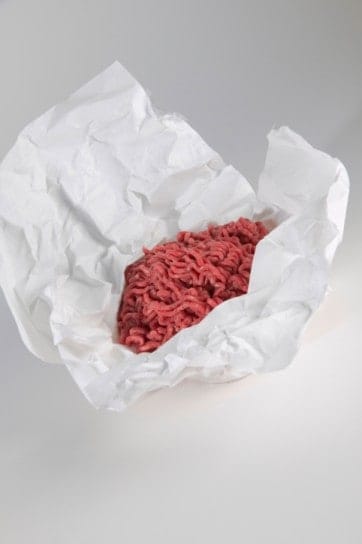 I spent about the next 2 hours or so, cutting the meat into smaller pieces and loading up my grinder, to where from my amazement, ground meat came out.  Ah, yes, beautiful ground chuck was going into my bowl, and then everywhere else.  Ground meat ended up on the floor, my dog did not complain, but it also made it all over the counters, the refrigerator, and in many places after a good cleaning I am sure will soon let me know what that lovely scent meat has after being left out for a few days.  I attempted to regrind my meat again, one of my best friends made some Swedish meatballs over the Christmas holidays that were to die for, and she thought part of this was due to the multiple grindings her meat underwent.  Upon the next grinding I had to apart my grinder and clean it out several times because stringy bits were getting caught in my grinder.

Now, after getting the meat ground, I did make some burgers and they were fantastic.  The meat was  so nice and fresh.  Being a single person, and now what to do with nine more pounds meat.  So it is going to be vacuum packed as soon as I post this and placed in my freezer.  Did the meat taste better? Yes.  Do I think that it was better quality than what I would buy in the grocery store, most likely.  I just found the cleaning up process to be a lot more involved than what I signed on for.  Now if I had someone to split some of the labor with, and then package up the meat I would do it again in a heartbeat.  At the very least I will be moving the grinder to a place where it will make a less of a mess.

Next time I grind meat I hope to use a real meat grinder, not the Kitchen Aide attachment.  While it was good, and honestly later on, I really appreciated the meat that I ground up, I want to try it differently.  I love to grind up chicken breast patties along with zucchini and onions and make chicken patties.  The thought of some homemade sausage also sounds very appealing.  The folks from Pleasant Hill Grain were kind enough to send me a meat grinder to try, so look for a new adventure coming soon!

CopyKat.com is the creation of Stephanie Manley. Stephanie started publishing recipes on the web in 1995 as a means to capture her family recipes in a format that they would not be thrown away. Over the years she has developed many recipes that taste just like restaurant recipes. END_OF_DOCUMENT_TOKEN_TO_BE_REPLACED