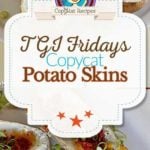 TGI Friday’s Potato Skins are delicious. I can’t think of a better way to use up potato skins than to make these delightfully baked potato skins. Save the meat of the potatoes to make mashed potatoes or potato soup.

Are you a fan of TGI Friday’s? I know I am! Well did you know that the first TGI Friday’s was opened in New York City, in 1965 as a place where Allan Stillman, its owner, could meet women? Yes indeed, TGI Friday’s was among the first bars to promote Ladies’ Night, to attract more women in for less expensive drinks. And in case you were wondering, it was Stillman, along with an old college buddy, who later opened Tuesday’s, Wednesday’s, Thursday’s and Ice Cream Sunday’s.

Impress your friends with that little bit of trivia. But while you are sharing these tidbits, you have to bring out these amazing potato skins.

Can you eat baked potato skin?

Yes, of course! In fact, there is a lot of fiber and nutrients in the skin. The white part, or the “flesh” of the potato, is full of carbs. Some people just prefer not to eat it because it is either too crispy or too tough. But when you make these little snacks, everyone will love them.

How Many Calories in TGI Friday’s Potato Skins?

Is potato skin good for you?

Yes, potato skin is full of fiber. In addition to the fiber, they are an excellent source of vitamin B, calcium, other nutrients, and phytochemicals. The skins are good for your hair, nails, and mind.

How to bake potato skins in the oven

Start off with the right potato. With over 200 varieties of potatoes sold in the United States, its important to choose the potato that will yield the best results. Most chefs use Russet potatoes when making potato skins. Russets are the quintessential, Idaho, baking potato. Their high levels of starch make them perfect for baking and their slightly thicker skins can hold on to the toppings. These are the potatoes TGI Friday’s uses to make their potato skins.

You don’t need to think you are going to be wasteful when making these potatoes. Do what restaurants do, you can reuse the meat of the potato for another dish. Did you know when you make these potatoes you can use the insides of the potatoes make Bennigans Garlic Mashed Potatoes?

It doesn’t get much easier to make these potato skins. In fact, you may want to do some batch cooking and prepare extra baked potatoes one night, and then another night you can make potato skins.

This is an appetizer recipe everyone loves. Potato skins are perfect for those who need a gluten-free treat. While they add cheese, green onions, and bacon to their potatoes, you could add other toppings like chili and some jalapeno peppers if you desired.

How to Cook TGI Friday’s Potato Skins in the Microwave

Honestly, I prefer to make them in the oven. They turn out crispier. But if you want, you can certainly make them in the microwave too. Just understand that they won’t be nearly as crispy and the texture will be off.

One thing is for certain you are going to be amazed at how easy it is to hack a recipe from TGI Friday’s. You can be the superstar at your home when you recreate TGI Friday’s Baked Potato Skins at home.

Love the food from TGI Friday’s? Me too! Here are some of my favorite copycat recipes. Try them with the baked potato skins.

Do you love serving delicious, easy game day food? TGI Friday’s Potato Skins are easy to make and are a popular dish for Sunday game watching, or for a fun appetizer with your otherwise routine, weekday dinner.

TGI Friday’s Potato Skins are also inexpensive to make, so they are perfect for a large crowd, game or no game. It’s amazing how easy it is to hack this recipe from TGI Friday’s. You will be a superstar when you recreate TGI Friday’s Baked Potato Skins at home. 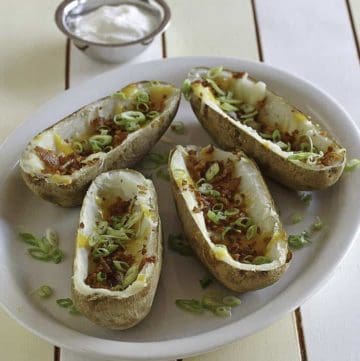