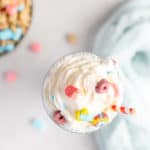 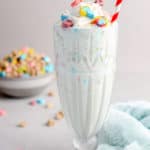 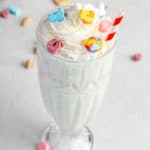 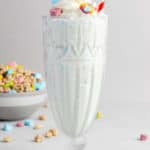 Burger King Lucky Charms Milkshake is a creamy and delicious treat for kids of all ages. This tasty shake is made with marshmallow creme and Lucky Charms cereal.

A Lucky Charms-flavored milkshake? Yes, please! As crazy as it may seem, Burger King introduced several fun milkshakes in the summer of 2017. First, there was the Fruit Loop Shake, and then the Lucky Charms milkshake.

Unfortunately, it was part of a limited-time-only promotion that is now over. But, if you completely missed the promotion or wish you could enjoy it again, you can easily recreate Burger King milkshakes at home with this easy-to-follow recipe.

Your favorite cereals from childhood taste so good in ice cream. I bet as a child we all wanted to put ice cream in our cereal. Well, now you can do just that. I love the flavor combination and crunch of the cereal. It looks so good when poured into a glass.

What Ice Cream Should I Use?

Burger King uses vanilla soft-serve ice cream as a base for all of its shakes. However, unless you happen to have a soft-serve machine at home, you’ll have to substitute regular ice cream instead. The only problem is that regular ice cream doesn’t produce the same creamy texture that made the original shakes so addictive.

Don’t worry. There is a fantastic hack you can try that not only recreates the silky smooth texture of soft-serve ice cream at home but also lets you make a milkshake without the need for a blender!

But My Favorite Cereal is ____. Can I Use It to Make a Milkshake?

Why the heck not? You can turn almost any cereal into a shake, but you may need to adjust the recipe slightly. Try making these variations, and then experiment on your own:

Tips for Making and Serving a Lucky Charms Shake

Check out more of my easy drink recipes and the best fast food recipes here on CopyKat!

Take a look at more of my ice cream drinks on YouTube! 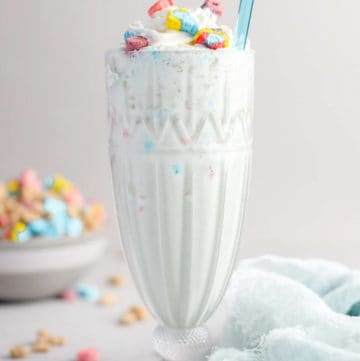