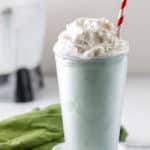 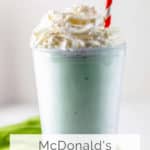 McDonald’s Shamrock Shake is one of their best-known seasonal menu items. This minty ice cream treat makes an annual appearance for St. Patrick’s Day. If you wanted to make one yourself, you can do so any time of the year now.

St. Patrick’s Day has always been a huge celebration in the US. Whether you’re Irish by birth, heritage, or you haven’t a drop of the Emerald Isle in your veins, you probably already celebrate the holiday. And even if you aren’t into drinking alcohol, you can still indulge with a Shamrock Shake at McDonald’s! What is so wonderful about a copycat recipe? While McDonald’s offers these for only a limited time every year, you can have one anytime you want.

What is a Shamrock Shake?

Believe it or not, McDonald’s has been serving Shamrock Shakes in one form or another since 1967! That’s the year a franchisee in Connecticut added green food coloring to vanilla shakes and served them up at his restaurant in celebration of St. Patrick’s Day.

He may have drawn inspiration for his creation from the annual dyeing of the Chicago River that began a few years earlier.

It didn’t take long for owners of other McDonald’s to take notice and start serving their own dyed shakes. Over the years, McDonald’s perfected the recipe and developed several different versions of the drink.

Although the shake was a regional favorite for decades, it wasn’t until 2012 that the Shamrock Shake became an official seasonal menu item on McDonald’s menus from coast to coast.

Its minty flavor and limited availability have driven the shake to cult status among many fans.

When are Shamrock Shakes Available?

The window to order a Shamrock Shake isn’t the same each year or in every restaurant. You can find the shake at most locations from the middle of February to late March.

It may be worth calling your local McDonald’s if you plan on making a special trip just for the shake. Armed with this copycat recipe you don’t have to wait for the annual return of the Shamrock Shake.

What Flavor is a Shamrock Shake?

A Shamrock Shake is essentially a mint milkshake. These days, you can find the original minty Shamrock Shake on the menu at McDonald’s along with an Oreo Shamrock McFlurry.

If you missed your chance to try this shake, or time has passed since the arrival of Shamrock Shake season, this shake tastes like a creamy, mint shake with hints of vanilla.

Why is this McDonald’s Shamrock Shake Recipe the Best?

The half & half and premium vanilla ice cream are the secrets behind the rich creaminess of this recipe. Many other online recipes call for whole milk, but milk can’t bring the same luxurious mouthfeel as half & half.

Some recipes include a splash of vanilla extract that can sometimes overpower the mint. Using good quality vanilla gives you the vanilla flavor without being too strong.

With only five ingredients that you probably already have, this homemade Shamrock Shake is easy to make.

There is a lot of freedom when it comes to the ingredients in this recipe. Whether you want to lighten this recipe, tweak the flavors, or add a bit of a kick to it, check out the following suggestions:

How to Make a Shamrock Shake

This mint milkshake is so easy to make. Here are the recipe steps:

How to Serve a Homemade Shamrock Shake

Pour the shake into a tall glass. Garnish with a dollop of whipped cream and maybe a cherry on top. Don’t forget the straw and a long-handled spoon!

In addition to the whipped cream, here are some great toppings:

CopyKat Tip: Before making a milkshake, let the ice cream sit out on the counter for a few moments. This way it is a little softer and will blend easier.

Refreezing thawed ice cream is not a good idea, so only make a shake when you are ready to drink it.

What to Serve with a Shamrock Shake

It’s just about perfect on its own, but it goes well with burgers and hot dogs, too. And don’t forget the fries!

A Shamrock Shake is best served immediately after making it because it will melt quickly.

Check out more of my easy drink recipes and the best McDonald’s recipes here on CopyKat! 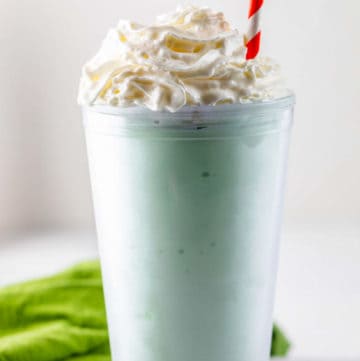 If you want to go dye free, just omit the green food coloring. It tastes the same, it just won’t be green.