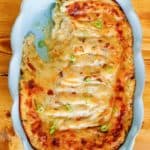 Dickey’s Barbecue Pit makes not only delicious barbecue, but they also make some of the best side dishes to go with their barbecue. Dickey’s Baked Potato Casserole is a side dish that you are going to love.

Dickey’s Barbecue has been around since the 1940s. They spend hours smoking their meat, if you have never tried dining there, I would highly recommend stopping and having some of their barbecue.

While they care so much about their barbecue they also give just as much attention to their side dishes. One of my favorites is Dickey’s Barbecue Baked Potato Casserole. This casserole has everything you love in a loaded baked potato.

What makes this baked potato casserole amazing is that you can make it ahead of time and reheat it for dinner. If you are looking for a side dish to bring to a party, or a potluck this one is good because there are so many add-ins that the potatoes are flavorful and they won’t be dry.

While the restaurant serves this in individual dishes, you can make it in a 2-quart baking dish.

How to Make Baked Potato Casserole

Check out more of my potato side dish recipes and the best casserole recipes here on CopyKat! 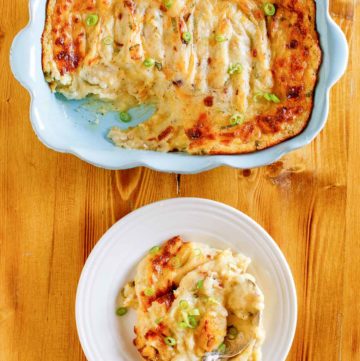 It is not necessary to poke holes in the potatoes; in fact, if you don’t they will be light and fluffy. Only potatoes that are overcooked explode in the oven.