Apple Crisp with oats is a wonderful dessert you can make and nothing beats the smell of fresh apples baking in your oven. Buttery oatmeal crumble topping with cinnamon really makes this crisp incredibly delicious.

You may be looking for an easy recipe for homemade apple crisp with oatmeal topping. This is a wonderful dessert you can make, and nothing beats the smell of a fresh apple crisp baking in your oven and whetting your tastebuds.

When I was a small child growing up in Pueblo, Colorado, my family had several apple trees in our backyard. When the right time came during the late summer and early fall, we were busy picking apples and preserving them.

Sometimes we were lucky and my mom would put together an apple crisp for dessert. We always made fried apples, but an apple crisp with fresh apples was a special treat.

What’s in this Apple Crisp recipe?

This is an old fashioned apple crisp. It’s delicious and the best apple crisp recipe your family will fall in love with and request often.

It has a butter topping using rolled oats – the kind you would use to make hot cereal for breakfast. The topping is sweetened with brown sugar and flavored with cinnamon and vanilla.

The filling is made with apples, sugar, a bit of cornstarch, vanilla, and a squeeze of fresh lemon juice. I like to use baking apples for this recipe, as they tend to hold up to the heat well.

Here’s what you need to make this incredible apple crisp with oat topping:

Preparing a homemade apple crisp is actually pretty easy. So if you don’t think you’re very good at baking, this may be a great recipe for you to try.

If you can measure accurately and follow directions, even a beginner cook can have great success with this recipe. Enjoy!

How to Make Apple Crisp with Oatmeal

What are the Best Apples to Use in an Apple Crisp

For this recipe, I like to use two different types of apples. Granny Smith is a nice tart apple that bakes up very well. I combine the green Granny Smiths with red apples such as Braeburn, McIntosh, or Red Delicious apples.

Often it’s what red apples are on sale that makes the choice for me. You just want to make sure you are using an apple that will bake well.

I like using several types of apples because you get the best flavor this way. I always like to layer flavors.

Apples are a natural pick for baking with spices like cinnamon. Read about twelve different varieties of apples that are good for baking.

What to Serve with Apple Crisp

Serve apple crisp with a big dollop of whipped cream or a scoop of vanilla ice cream. However, it’s even good just plain and hot straight out of the oven.

Be sure to check out more of the best desserts and fall recipes here on CopyKat! 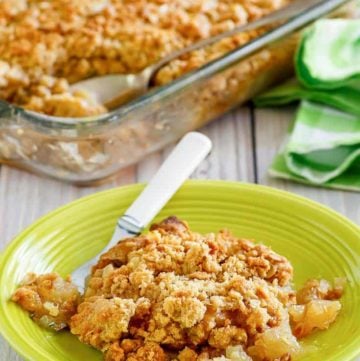