Senate Navy Bean soup has been served at the nation’s capital cafeteria for over 100 years. You can recreate this famous soup at home.

It was said that Senator Fred Thomas Dubois of Idaho, was responsible for a resolution that required this bean soup to be served every day on the menu.

Senate Navy Bean Soup is one of those recipes with a past that is almost bigger than the recipe itself. Another one in this category is the Neiman Marcus Chocolate Chip Cookie recipe, which is an urban legend. However, this bean soup recipe has an uncertain past.

It is said that Senator Fred Thomas Dubois of Idaho was responsible for a resolution that required this bean soup to appear every day on the Senate menu. Dubois also thought that the soup should always be made with mashed potatoes (he was from Idaho after all!).

What is the story behind the Senate Navy Bean Soup?

Another legend is that the soup request originated from a Minnesota Senator who just loved the soup, Although there is no apparent connection of any ingredient with his home state.

Senate Bean Soup is so iconic that it has its own recipe page on the Senate website. It lists one version with spuds and one without.

What is certain is that this hearty bean soup has been available to US Senators every day from at least 1903. You could say that the soup is an example of a rare agreement between Republicans and Democrats!

Senate navy bean soup is not only enjoyed by members of the senate, it is also a favorite of many congress house of representatives and white house staff.

And, nowadays, there are many different versions of this recipe available online.

This recipe for navy bean soup is super simple. If you are looking for an inexpensive soup to make, you should consider this recipe.

Here’s a list of the ingredients you need to make this soup:

How to Make Navy Bean Soup

Soup is Good for You

Soup is good in two ways – it nourishes the soul and most soup recipes don’t cost a lot to make and help you save money. The basic ingredient in this simple soup is an inexpensive package of dry navy beans.

Chock-full of beans, ham, and celery, this hearty soup makes a wonderful meal at any time of year. If you have a holiday ham, freeze the bone until you’re ready to make soup.

Plus, once prepared, ham and bean soup freezes well for a great make-ahead supper. You will have a homemade soup to rival any bowl of soup in a restaurant.

Senate White Bean Soup is a great gluten free recipe to enjoy throughout the year.

Be sure to check out more of my hearty soup recipes and easy gluten free recipes here on CopyKat.com! 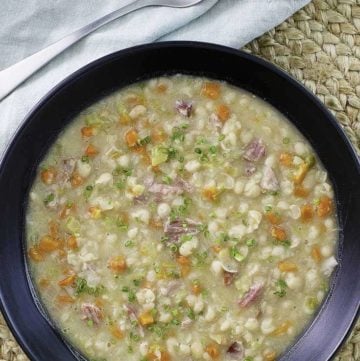