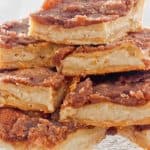 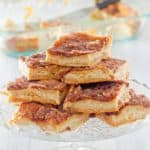 Sopapilla Cheesecake combines the taste of sopapillas and cheesecake. The flavors of cinnamon and sugar, cheesecake, wrapped in a flakey pastry make for a delicious dessert.

Sopapilla Cheesecake is the Perfect Dessert

Are you looking for the perfect dessert to bring to a potluck or a party? This is the dessert for you.

Sopapilla cheesecake is one of the best desserts you will have! It has layers of sweet buttery dough, a creamy cheesecake center, and topped off with cinnamon sugar goodness.

What is a Sopapilla?

Sopapillas are found in many different cultures but are generally known for the same time of delicious dessert.

They are pillowy pieces of dough fried in oil, that are known to either be dipped in cinnamon sugar, powdered sugar, or served with a fondue chocolate platter.

If you have ever been to a fair where they serve elephant ears, that is also another, larger version of a sopapilla. But, rather than keep the dough thick, it is rolled then and then fried in oil as well.

They too can be topped with cinnamon sugar, powdered sugar, or even pie toppings.

How Should You Store the Sopapilla Cheesecake?

Since the sopapilla cheesecake recipe calls for a large amount of cream cheese, you will need to keep the cream cheese crescent bars in the fridge when they are not being served.

By keeping the cheesecake bars in the fridge you are able to avoid them getting moldy or allowing for bacteria to grow.

So, to store them,  either keep them in the pan the sopapilla cheesecake was made in and add a lid, or cut them up and put them in an airtight container and store them in the fridge while you are not serving them.

While this fantastic cheesecake recipe is more than you will need for a hit recipe for your next party, you can always elevate this dessert with simple additions, like some tasty toppings.

A few of my favorite toppings to add is either a light dusting of powdered sugar or chopped up fresh strawberries.

Or if you want this a little more savory you can use a ziplock bag and pour in some caramel sauce and drizzle it all over and top it off with coarse sea salt. This will pair wonderfully with the cheesecake layer.

These are just a few of the ways to make these cheesecake bars a completely different dessert.

Is Sopapilla Cheesecake Easy to Make?

While cheesecake in its natural form can be a daunting dessert to tackle, this cheesecake sopapilla recipe is extremely easy in comparison.

When that is done, mix together the cheesecake ingredients, spread it out on top of the dough.

Then, just place the other piece of dough on top of the cheesecake layer, top it off with cinnamon sugar, and bake it.

This recipe has easy-to-find ingredients. You can see this has all of the flavors of cheesecake, but you don’t have to worry about finding exotic ingredients.

How to Make Sopapilla Cheesecake

Wonder how easy it is to make this cheesecake? It’s easy. Here are the steps:

I hope you give this recipe a try. I have brought this dessert to several potlucks and bunco parties, and the dish has always come back empty!

Check out more of my easy cake recipes and the best dessert recipes here on CopyKat! 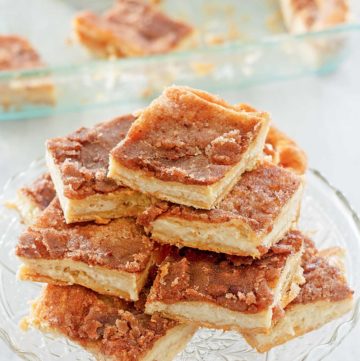 If you really want to send this dessert over the edge, you may want to serve this with a scoop of vanilla ice cream.