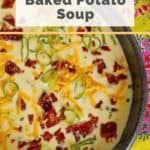 Houston’s Restaurant is an American casual-dining restaurant chain with an upscale vibe that is owned by Hillstone Restaurant Group. As of 2016, there were fifty-one Hillstone locations in thirteen states operating under various names.

The restaurant group aims to provide a menu exemplifying consistency and quality in a way not usually found in this type of restaurant. If you are interested, you can read a more detailed history of Hillstone and Houston’s restaurants.

Baked potato soup is famous among soups and Houston’s Baked Potato Soup is a delicious version of this classic. Houston’s is primarily known for turning classic dishes into food that is extra special with the addition of some unusual, tasty ingredients.

In the case of this soup, it’s the fennel that really adds a flavor that’s interesting and a little different.

All About Fennel Seeds

Fennel is a perennial herb that is part of the parsley family. The slightly sweet-tasting, anise-flavored fennel seed is one of the most widely-used ingredients in cuisines all over the Mediterranean region.

Fennel seeds are high in minerals, vitamins, essential oils, and other health-beneficial nutrients. You can read more about fennel seeds.

How to Buy Russet Potatoes

A green tint on potatoes means that they are old and well past their prime. Look for potatoes that are even in size and have consistent brown skin.

If your potatoes have a few sprouts, remove them before cooking. Potato sprouts are not tasty and are believed to be poisonous.

Russet potatoes are ideal for baking. They are shaped just right for your favorite baked potato toppings.

You may think you are in baked potato heaven when you taste this creamy soup.

I don’t know who first thought of baking them and making them into a soup, but it was pure potato inspiration. You can get an answer on the possible origins of baked potato soup from Dr. Potato.

Check out more of my easy soup recipes and the best copycat restaurant recipes here on CopyKat! 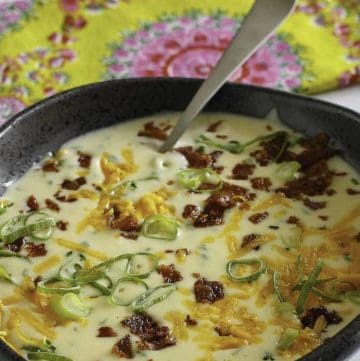 What type of toppings to use on your soup 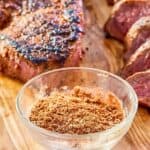 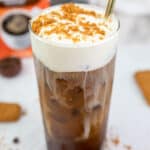