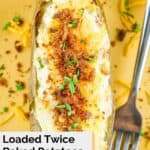 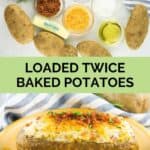 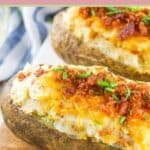 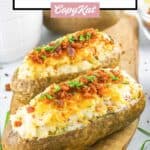 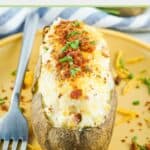 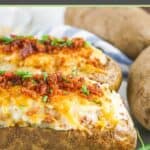 Loaded Twice Baked Potatoes are what I like to make when I want to serve a dinner that is a little fancy. Are these hard to make? No. Do they look pretty and make everything think you are the perfect host? Yes!

Whoever thinks baked potatoes are boring has never tried this easy-to-make loaded potatoes recipe. A creamy smashed potato stuffed inside a crunchy potato skin and topped with bacon, scallions, and a sprinkling of cheese is satisfying enough for a light meal or snack and makes a hearty side dish.

Once you taste one, you’ll never settle for ordinary baked potatoes again.

Let This Be Your Make Ahead Twice Baked Potato Recipe

Baked potatoes are good with a wide range of main courses, but they take a long time to cook. That means that most people aren’t making them for weeknight dinner.

These loaded potatoes are not only more tempting than everyday baked potatoes, but they are super easy to prepare in advance and keep in the fridge or freezer for a quick and delicious side dish. Stop cooking oven fries or instant mashed potatoes when you can serve this easy twice baked potatoes recipe in just about the same amount of time.

To make this recipe, you’ll need:

The best potatoes to use are classic baking potatoes like Russets for this recipe. For smaller servings, Yukon Golds are a great choice.

You can make your own bacon bits or use the ones from the store.

How To Make Twice Baked Potatoes in the Oven

To prepare this recipe:

To make the potatoes ahead of time, let them cool before wrapping the baked potatoes in plastic and keeping them in the fridge for up to two days, or place them on a baking tray and freeze.

When they are frozen solid, transfer them to a freezer-safe container and save them in the freezer for up to a month.

When you are ready to finish cooking the thawed potatoes, add the shredded cheese and broil them according to the recipe.

There are lots of ways to make this recipe your own. Get creative, or try one or more of these changes:

What To Serve With Twice-Baked Potatoes

These potatoes go great with grilled and roasted meat, as a side for chili, or even on their own.

How To Store Loaded Potatoes

You can store cooked potatoes in the fridge for up to two days, wrapped in plastic.

For longer, freeze the potatoes on a baking tray. When solid, transfer to a freezer-safe container and keep them in the freezer for up to a month.

Loaded potatoes reheat wonderfully. If you want, add some extra cheese to the top of the potatoes before warming.

Potatoes will get extra crispy in an air fryer:

If you don’t have an air fryer, reheating in the oven is another good method:

Check out more of my easy side dish recipes and the best comfort food recipes on CopyKat! 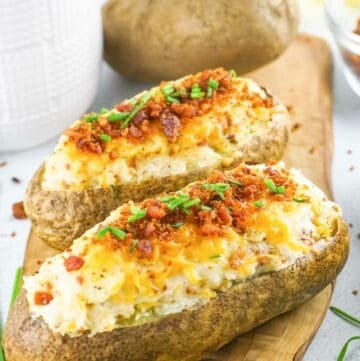