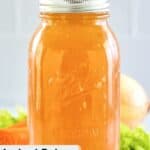 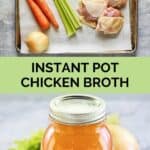 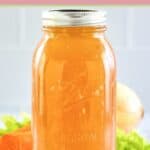 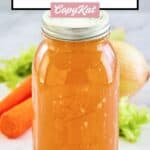 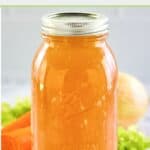 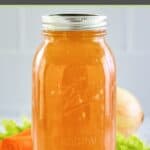 Homemade chicken broth is so simple and a wonderful soup to enjoy or use in recipes. Chicken bones and vegetables give this DIY broth deep flavor.

Instant pot chicken broth is a one-step recipe. All you need to do is place chicken, onion, carrots, celery, and water in your Instant Pot and let it cook for ninety minutes. What could be easier?

Why Homemade Chicken Broth Is Better Than Store-Bought

This chicken bone broth Instant Pot method is a super fast way to make chicken broth that is way better than anything from the store. You have complete control over the ingredients and don’t need to read a label to decide if a container of broth is really good for you.

In fact, this pressure cooker chicken broth recipe will change your life, and once you try homemade, you will never go back.

Homemade chicken broth is so much richer and deeper in flavor. You will reach a new level of home cooking appreciation when you can casually speak to your friends about making your own broth.

With this simple recipe for chicken broth, you’ll always have a nourishing base for sauces and soups. Here’s all you will need:

How to Make Chicken Broth in Instant Pot

If you’ve got a chicken carcass leftover from making roast chicken or from a store-bought rotisserie chicken, don’t think there’s nothing you can do with it! Save it for making chicken broth. You don’t even have to use the carcass right away. Place it in a big freezer bag and put it in the freezer until you’re ready to make broth.

You can even use up all those vegetable scraps lingering in your fridge. You know, the ones you typically discard during your monthly clean-out.

How Do You Make Broth in General?

Some traditional recipes for making broth call for six to eight hours of simmering on the stovetop. However, the Instant Pot electric pressure cooker will give you delicious broth in less than an hour without your having to babysit it. Plus, you won’t have to cope with overflows on your clean stovetop.

Really, you most likely don’t have the time to spare to watch a pot simmer for six, seven, or eight hours. Even if you do, you might not want the aroma of boiling chicken for eight hours straight.

What Is the Difference Between Chicken Stock and Chicken Broth?

Chicken stock and chicken broth are quite similar but not exactly the same.

Chicken stock has a pretty well-defined set of ingredients: chicken bones, mirepoix (e.g., carrots, celery, onions), and some kind of herbs and/or aromatics. Chicken stock is hearty—when refrigerated, it solidifies into a gel due to collagen from the bones leaching into the stock.

Chicken broth, on the other hand, is more loosely defined. Broth simply describes a liquid that chicken (or some other meat) has been simmered in. For instance, the liquid remaining after poaching chicken breasts could be considered a broth.

Broth is typically a bit lighter in consistency and less nutrient-dense than stock. If you use chicken with some bones, you’ll get a slightly denser chicken bone broth.

How to Use Instant Pot Chicken Broth in Everyday Cooking

You might be wondering what chicken broth is good for. The answer is just about any soup or stew will be made way better if you use your homemade broth. You can also use it instead of water to cook grains, rice, quinoa, barley, etc.

How to Store Chicken Broth

Tip: Freeze the broth in small containers. Then you can easily pop one out of the freezer without having to defrost a big frozen block. One idea is to use silicone ice cube molds. Place the frozen cubes in a plastic zip-top freezer bag. Each cube will give you about 1/3 cup of broth.

Check out more of my easy soup recipes and the best Instant Pot recipes here on CopyKat! 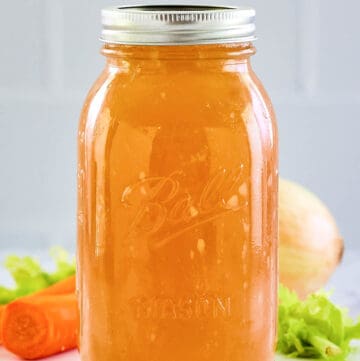 There is no salt or pepper added to the stock before cooking, this will allow you to season to taste when you are preparing your final dish.