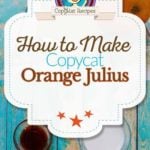 How would you like to make the Orange Julius we all love from our neighborhood Dairy Queen restaurants? This delightful, creamy drink is a frothy smoothie that you can make. This easy Orange Julius recipe can be made with just five ingredients, and best of all it tastes just like the real thing. Yes, a copycat recipe will taste like the original Orange Julius. This is a drink the entire family will love.

It used to be that you could only get this drink from an Orange Julius stand or an Orange Julius store that was located in your favorite food court or mall years ago, but after Dairy Queen bought the rights to this much-loved chain, the DQ is where you need to go to get one of their delicious fruit smoothies.

We now have the secret ingredients to this orange drink recipe (thanks to Dave Oberg) and you can enjoy it in minutes. There are only 5-ingredients, making this a refreshing treat on a hot summer day.

This recipe works very well because it does a good job of mimicking the flavor you have always known. The orange juice concentrate gives you lots of flavors, and it is better to use than orange juice. Orange juice is watered own. The vanilla pudding powder provides a boost of vanilla flavor and the egg whites in the pudding mix gives this drink a lift.

The very famous Orange Julius drink started as an orange juice stand back in southern California. Orange groves were near Los Angeles back in 1926 and Julius Freed created this sweet treat. Sales were very modest early on so a friend came up with the idea of a drink mix that would make the acidic orange juice easier on the stomach.

Freed’s stand took up this new drink, which had a frothy, creamy texture, and sales took off. It became so popular that people began lining up at the store and shouting, “Give me an Orange, Julius!”

Did the Orange Julius use raw eggs?

When the Orange Julius first came out they did use raw eggs in the recipe, but the recipe was changed over time, and they changed the raw eggs to egg white powder.

Is the Orange Julius Healthy?

A small Orange Julius may not be the healthiest option, if you buy one in the restaurant a small one has about 300 calories, and it has about 75 grams of sugar, which is equivalent to a soda. There is about a gram of fiber in a serving, but these are low in salt with only about 57 grams. These may not be the healthiest option, but they are a great treat to enjoy once in a while.

You can enjoy this orange creamsicle flavor once in a while. So don’t miss out on this fun drink, it is like a milkshake but made with orange juice.

How to Make an Orange Julius

You only need these five ingredients to make a homemade Orange Julius:

Put 1 1/2 cups of ice and all 5 ingredients in a good blender. Blend until smooth and you have your Orange Julius!

Although this is the perfect refreshing drink to make any time, it’s especially good in the heat of summer. It’s a fun, non-alcoholic beverage that your whole family will enjoy.  To make things easy, you can watch a video to see how to make this special orange smoothie.

Be sure to take a look at these restaurant drink recipes and copycat desserts.

Did you make and love this recipe? Give your review below and make sure you share your creations by tagging me on Instagram! 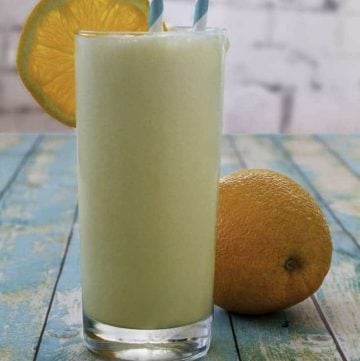