Arby’s Horsey Sauce is a classic sauce that we all love. Arby’s has many great items on the Arby’s menu. This sauce has just the right amount of heat, and it is easy to make at home.

Growing up, we went to Arby’s once in a while. I always thought this restaurant was better than an ordinary hamburger place. Arby’s has two sauces that are amazing.

I personally love Arby’s Sauce, a ketchup that’s kicked up a bit and goes well with French fries – and just about anything you pour the sauce over.

I also like their spicy Horsey Sauce, and I think it was the first time I tried anything with horseradish in it. I’ve even heard of people using both sauces together!

Why this Copycat Arby’s Horsey Sauce Recipe is the Best

I have looked at other recipes online for Arby’s Horsey Sauce, but I was always a little disappointed in the results. If you recall, this sauce has no texture. It’s creamy, with some heat and a little bit of sweet.

There are only 4 simple items you’ll need to make this creamy horseradish sauce. Here’s a handy list:

How to Make Horsey Sauce

How long does horsey sauce last?

This sauce will stay fresh once made for about 7 to 10 days. I think it tastes a little better once it has had the chance to sit and the flavors get to mingle a bit. The flavor, in my opinion, tastes even better the day after you make the sauce.

Other Uses for Arby’s Horsey Sauce

You might wonder how many uses for this classic sauce you can come up with. Well, you can use this horseradish cream sauce on everyday sandwiches.

It tastes wonderful on a homemade hamburger, and I even like to serve a little bit of it with roast beef. You might be able to think of more ways to use this yummy horseradish sauce.

What Does Horseradish have to do with Horses?

The German name for the plant is “meerrettich” which translates as sea radish because it’s found near the sea. Apparently, the English couldn’t pronounce the word “meer” properly and began referring to it as “mareradish.” Eventually, this turned into horseradish.

The word “horse” in this context denotes coarseness and large size and the word “radish” comes from the Latin radix meaning root. There’s a lot more to horseradish history than you might think.

And, why not combine horseradish with mashed sweet potatoes?

Be sure to take a look at my popular copycat recipes and easy recipes for dips and sauces. 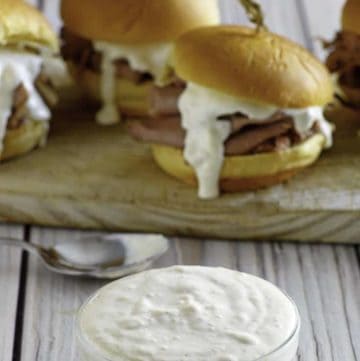