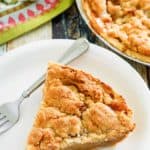 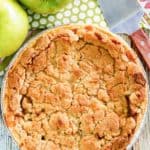 You can make an old-fashioned Dutch Apple Pie with this recipe. This delicious pie has cinnamon apple filling and buttery streusel topping. This is a great recipe to try when you want something more than a traditional apple pie.

There is nothing quite like the smell of an apple pie baking in the oven to bring a flood of happy childhood memories streaming back. Apple pie combines sweet and tart apples with a flakey, butter crust, and, if you are fortunate, a wonderful crumble topping to make one delicious dessert. The next time you get a craving, skip the ready-to-bake Marie Callendar Dutch Apple pies and bake your own homemade dutch apple pie.

Appeltaart is a famous apple pie dessert in the Netherlands, but it’s very different from American-style Dutch Apple Pie. So, what is Dutch about this style of apple pie?

The “Dutch” moniker most likely comes from the Pennsylvania Dutch, a group of early American settlers from Germany, not Holland. After arriving in the US, the Pennsylvania Dutch created their own insular communities and continued to speak their traditional dialect of German called Deitsch. When the local non-German speakers misheard the name of the language, they began to call the settlers ‘Dutch’. The Pennsylvania Dutch are responsible for many famous “American” dishes, including chicken and waffles, funnel cakes, pretzels, root beer, and coleslaw.

The easiest way to ruin an apple pie is by using the wrong apples. Good apple pie apples have the right balance of sweetness and tartness and need to resist turning into mush in the oven. You may already have a favorite type of apple for pies, feel free to use them, but if you are looking for something new, try one of these apples in your next apple pie filling:

Stay in the know about everything we are doing by following us on Facebook!

Here is what you need to make the pie:

How to Make Dutch Apple Pie

Brush the bottom and sides of the pie crust even with egg white.

Bake on a baking sheet until light brown, about 5 minutes. Remove crust from oven.

Make the crumb topping by combining flour, sugar, and brown sugar in a bowl.

Cut in 1/3 cup margarine or butter until crumbly.

Bake on a baking sheet at 375 degrees for 50 minutes or until topping is golden and filling is bubbly.

I hope you enjoy this amazing recipe for apple crumble pie. It is a favorite pie of mine during the winter months. This is made with simple ingredients and a delicious homemade apple pie filling. My family thinks it is the perfect apple pie! So next time you want an apple pie, you should give this easy dutch apple pie recipe a try!

Be sure to check out more of my easy pie recipes and homemade desserts. 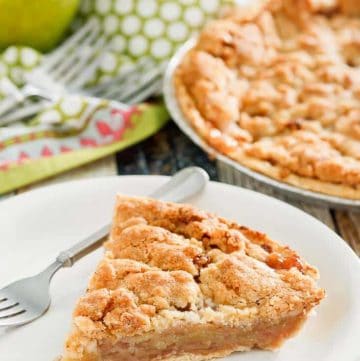