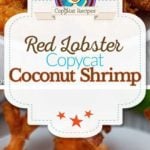 Red Lobster Parrot Bay Coconut Shrimp is a long-time menu favorite at the Red Lobster. You can recreate this dish at home with this easy copycat recipe. This shrimp appetizer goes well with clam chowder!

Hands down, Red Lobster Parrot Bay Coconut Shrimp is one of my long-time favorite recipes from the Red Lobster. It seems that this dish has been renamed Parrot Isle Jumbo Coconut Shrimp. Whatever the name, you can get this simply irresistible shrimp dish either as a main dish or as an appetizer.

The shrimp is breaded with coconut, fried until perfectly crisp, and then served with a wonderfully light and flavorful pina colada dip. Red Lobster also includes salsa on the side. Now you can recreate this dish at home, and you won’t believe how easy it is to make.

Here’s what you need to make Parrot Bay coconut shrimp:

When choosing shrimp for this recipe, I personally like to go for the larger size just like Red Lobster. They cost a little more, but you will have less work in prepping your shrimp, and I personally like to devein my shrimp when I prep them. (If you watch the grocery store ads you can often find shrimp on sale.)

That thin black string down the back of a shrimp is not actually a vein but rather the shrimp’s digestive tract, and its dark color means it is filled with grit. Even so, the vein is not harmful if eaten. So the decision to devein shrimp is basically a matter of personal preference and aesthetics. And, with jumbo shrimp, it is fairly easy to devein them.

Devein your shrimp by using a sharp paring knife to make a slit along the back and lift out the vein with the tip of the blade. You can also use a shrimp deveiner, a knife-like kitchen tool made specifically for deveining shrimp with their shells on. This tool can be purchased at any kitchen supply store.

Butterflying your shrimp helps them cook more evenly and gives you an attractive presentation. Watch this video and see a three-step demonstration of how to devein and butterfly your shrimp.

Be sure to check out more of my easy shrimp recipes and the best casual dining restaurant recipes. 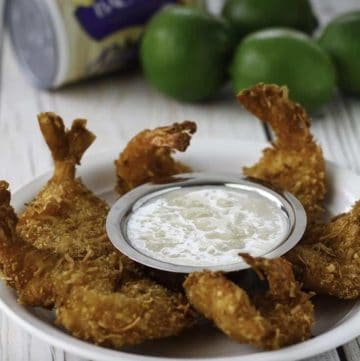