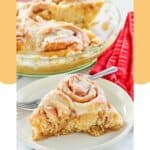 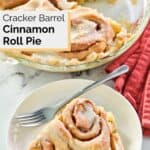 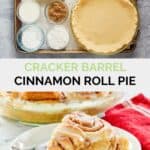 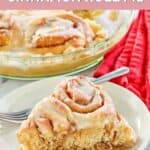 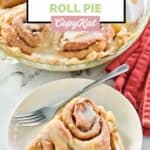 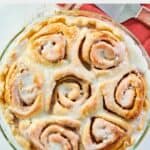 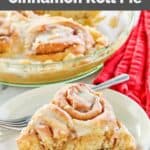 What Makes the Cracker Barrel Cinnamon Roll Pie the Perfect Addition to Breakfast or Brunch?

When autumn rolls around, the good folks at Cracker Barrel Old Country Store get even more creative with their warm seasonal touches and pie offerings. For years, this recipe has been a seasonal breakfast favorite of guests who can’t get enough of warm cinnamon rolls baked on a flaky golden pie crust and then topped with an ooey-gooey icing.

This year, make Cinnamon Roll Pie part of your holiday tradition. You can serve this breakfast pie for Christmas, Thanksgiving Day, Easter, or Mother’s Day.

Why This Recipe Is So Good

The secret to this version of Cinnamon Roll Pie is the from-scratch cooking. It may take all morning to prepare, but once you taste the results, you’ll know it was completely worth it.

The vegetable oil is only for greasing a mixing bowl to prevent the dough from sticking. Use a neutral oil like canola.

Both instant and active dry yeast will work in this recipe.

You can use heavy cream or half & half instead of milk for extra-rich frosting.

To assemble the pies, you’ll need:

Try this recipe for pie shells if you don’t already have a favorite.

How To Make This Cinnamon Roll Pie Recipe

To prepare the cinnamon roll dough:

To make the cinnamon roll filling:

To assemble the cinnamon rolls:

To finish the Cinnamon Roll Pies:

To make the icing:

There is no denying that making this Cracker Barrel Cinnamon Roll Pie recipe from scratch is a bit of a project. You can use several shortcuts if you find yourself running short on time. Choose one, or use them all; no one will tell.

What To Serve With Cinnamon Roll Pie?

A hot cup of coffee, espresso, or breakfast tea will provide just the right amount of acidity to complement the pie’s sweetness.

How To Store the Leftovers

Cinnamon Roll Pie does not need to be refrigerated if you plan to eat it within two to three days. Keep it in an airtight container in a cool part of your kitchen. You can also refrigerate the pie for up to five days.

What’s the Best Way to Reheat a Cinnamon Roll Pie?

The best way to reheat cinnamon pie is in the oven:

You can also reheat it in the microwave for about 15 seconds.

Check out more of my easy breakfast recipes and the best copycat Cracker Barrel recipes on CopyKat! 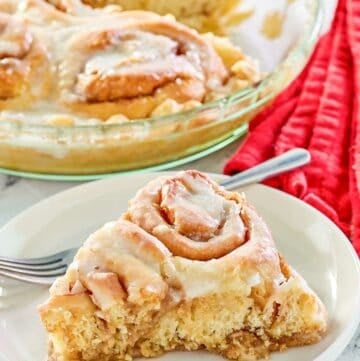