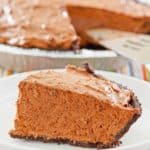 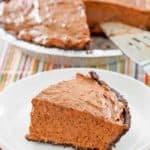 Chocolate Pie doesn’t get any easier than this recipe. By combining milk, two packages of chocolate pudding, and Cool Whip, you are in for a delicious chocolate pudding pie that even the least experienced cook could make.

Sweet and creamy no bake chocolate cream pie is a favorite dessert to make. Plus it is easy to make!

Why Make This Amazing No Bake Chocolate Cream Pie

First, everyone loves a good chocolate pie with Cool Whip. Honestly those are two of my favorite things!

You can make this dessert recipe in no time! It is super simple to make, and you don’t have to watch the oven to make sure it over bakes.

I have brought this chocolate pudding pie to many different events, get togethers, and potlucks, and it is always a hit. I’ve even considered bringing two chocolate pies since one goes so fast.

So, make sure to make this no bake chocolate pie with cookie crust for your next party! People will be asking for your recipe before the party is done.

Yes cool whip does thicken up pudding. Since pudding is normally made with cold milk, using Cool Whip in its place or along with milk, will make a thicker, creamer pudding.

Why does this work? Well whipped cream is made mostly of milk, so the cool whip absorbs and takes on the flavor of the pudding mix, creating a very creamy and fluffy pudding.

Does chocolate pie need to be refrigerated?

Since this is a cream pie, it will alway need to be stored in the fridge otherwise it will go bad very quickly.

The chocolate pudding cool whip dessert can stay in its pie pan, just be sure to cover it with foil before putting it in the fridge. If you want to avoid losing some of the cool whip to it sticking to the foil, pop in some toothpicks to levitate the foil slightly.

Chill the pie before serving it, but keeping it out at room temperature for an hour or so will be just fine, just make sure to put it right back into the fridge.

After making chocolate pudding pie, it will be stored in the fridge while it is not being served. By keeping it in the fridge, the pie will hold up for 4-5 days. After that, the pie crust might be a little bit mushy and the cool whip will begin to deflate.

This pie is best eaten within the first 2-3 days, so feel free to make it up a day ahead of time for your next event. It will still taste absolutely delicious!

How to freeze this creamy chocolate pie

To freeze the pie, wrap it tightly with several layers of plastic wrap or freezer wrap. Press the wrap onto the surface of the pie. This will prevent ice crystals from forming on top of the pie.

You can keep this pie in the freezer for up to 3 months.

Remove the pie from the freezer the day before you want to serve it. Place it in the refrigerator to thaw overnight.

Can I Use Whipped Cream?

I do not suggest using homemade whipped cream for making this chocolate cream pie recipe. And you will definitely want to steer clear of canned whipped cream.

Neither homemade or canned whipped cream hold up long enough or have the right structure to make a pie out of it. If you’ve noticed, the whipped cream falls soon after it has been sprayed out of the can, and it would be the same for the chocolate pie.

Plus the whipped cream cannot stand up to trying to mix in the pudding mix for this recipe. Unfortunately it will not be a suitable substitute for these reasons.

Using only Cool Whip is your best bet for making this delicious pie.

How to Make Chocolate Pudding Pie

Can I use a different type of crust?

Yes, you can use a graham cracker crust or a regular pastry pie crust.

If you use a pastry pie crust, you will need to fully bake it and make sure it is completely cooled before adding the filling.

Take a look at this Martha Stewart Pie Crust recipe for a flaky homemade pie crust.

Top your pie with something delicious! Try some of these ideas.

How to store your chocolate pudding pie

Check out more of my easy pie recipes and the best family dessert recipes here on CopyKat!

The recipe is from Ethel Eynard. Jefferson City, MO. 1998. 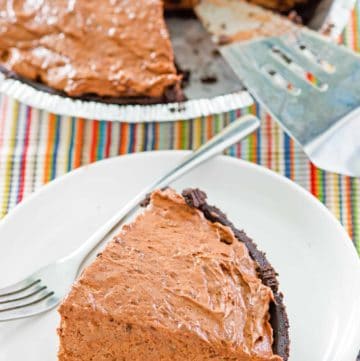 Store the pie in the refrigerator. You can use a graham cracker crust instead of the chocolate cookie crust.