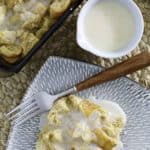 They make delicious bread at the Golden Corral, would their bread pudding be any different?  Melted butter, milk, spices, and day-old bread make a creamy and filling dessert. Making this copycat recipe is so easy!

Sink your teeth into a sweet dessert filled with flavor in every corner. Golden Corral is famous for its homemade bread, and their bread pudding is just as marvelous. There is nothing like it. But the good news is that it’s actually pretty simple to make at home.

What is bread pudding?

At the most basic level, bread pudding is a dessert made with stale bread, milk, and sugar. There are lots of varieties of bread pudding out there. Some people use cubed bread. Others add all sorts of mixins and different sauces.

Don’t be fooled by the name. Bread pudding doesn’t have the same texture as Jell-O pudding. It’s more like bread than a thick and creamy sauce.

Is bread pudding supposed to be soggy?

Yes, bread pudding is supposed to be soggy. Think of it like this: you are turning bread into a pudding. So it’s going to be a unique texture. It will be very soggy. The bread is drenched and cooked in a thick, creamy sauce.

What Type of bread should you use in bread pudding?

The thicker the bread, the better. I used thick slices of french bread. You can also chop up stale rolls or use brioche. The secret to the best bread pudding is using thick slices of bread, so buy an entire uncut loaf and slice it yourself.

What is in Golden Corral’s bread pudding?

Golden Corral serves their bread pudding with a sweet vanilla sauce. Here’s a list of the ingredients I used in my copycat version that tastes just like it:

This is one of the easiest recipes for bread pudding you will find. In fact, the most time-consuming part is making the vanilla sauce. After you make the sauce, just pour it on the cubes of french bread and bake it.

You should give it a shot!

How do you know when bread pudding is done?

Since bread pudding is soggy, you can’t go by the texture. The bread won’t soak up all the sauce.

You can tell bread pudding is done when the edges of the bread turn a light brown color.

How to Store Bread Pudding

You must store the bread pudding covered in the refrigerator. It will last up to 5 days. When you are ready to reheat it, it’s best heated in the oven. But you can also just put it in the microwave too.

If you enjoyed this recipe, you should try these next. They are fun and easy twists on a classic recipe.

Be sure to check out more of my easy dessert recipes and the best restaurant copycat recipes here on CopyKat.com! 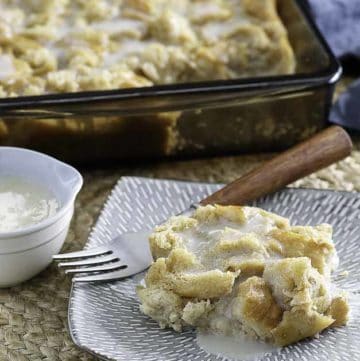