Chicken Gumbo is one of the South’s favorite recipes during Mardis Gras. Gumbo is made with a wide variety of meats like chicken, ham, bacon, oysters, crab, shrimp, and beef.

This chicken gumbo is a perfect gumbo soup recipe to try if you have never had this famous soup before.

There are many different types of gumbos, but perhaps the most popular varieties are seafood and chicken. This recipe retains a traditional chicken gumbo flavor while modernizing the old-school version slightly to appeal to modern tastes and cooking styles. As a bonus, there is no need to spend all day over the hot stove since this chicken gumbo soup takes less than an hour to make! So, if you love gumbo or even if you never tried it before, this is an excellent place to get your Cajun fix.

Exploring the Holy Trinity of Cajun and Creole Cooking

When it comes to cooking in Lousianna, three ingredients are so important that they have earned the nickname, the Holy Trinity. These essential ingredients are onions, bell peppers, and celery. While the importance of these vegetables in regional dishes ranging from étouffée to gumbo has a long history, the term only popped up in the early 1980s and is most likely created by Paul Prudhomme. He was a celebrity chef and owner of K-Paul’s Louisiana Kitchen in New Orleans. Prudhomme was in large part responsible for spreading knowledge of classic New Orleans dishes to the rest of the US through multiple cookbooks and media appearances.

The Holy Trinity’s importance in Cajun and Creole cooking is thanks to the large number of French descendants who ended up settling in Lousiana. French cuisine depends on mirepoix, which is onions, carrots, and celery, as a backbone of many recipes. But carrots tended not to grow well in the local area while bell peppers did, so the new arrivals substituted bell peppers for carrots in classic French recipes.

How to Thicken Gumbo Recipes

The most significant difference between traditional chicken gumbo and this recipe is the use of a thickening agent. Like many local specialties across the country, folks have their preferred way of preparing them. In Lousiana, there are three primary thickeners people generally view as acceptable to use in gumbo recipes. These thickeners are roux, file, and okra. Some gumbo recipes have up to two of these thickeners, but most include roux.

Roux is flour cooked in fat. There are different types of roux according to their color. In Creole cooking, the cooking style centered around New Orleans, the perfect roux color is similar to copper. Out in the countryside, Creoles prefer cooking the roux longer until it develops a dark reddish-brown hue. The problem with cooking roux is that it is extremely easy to burn and make your gumbo bitter.

The next thicken agent is okra, famous for its unique taste and slimy consistency. Okra is actually a fruit, but it is used as a vegetable. Some people despise it, but it is a common ingredient in gumbos. There are several ways to help reduce the dreaded sliminess of okra, from soaking it in vinegar to precooking okra over high heat before adding it to the gumbo.

The third type of thickener is filé powder. Filé powder comes from dried sassafras leaves and is more likely to show up in the rural Creole gumbos. Cooks don’t cook with filé powder but stir it into the pot once removed from the heat.

Summing up the thickening of gumbo you can use two of these three methods.

Why do they call it gumbo?

Gumbo inherited its came from the country of origin. In many West African languages, the word “gombo,” translates to “okra.” In the earliest recipes, okra was one of the main ingredients, but the United States is the melting pot so the recipe changed over the years.

What is the difference between gumbo and jambalaya?

Gumbo is a soup that is served with rice, jambalaya is a rice dish. Many restaurants and many home cooks will serve plain rice with Gumbo, and allow the person being served to add as much or as little rice as they desire in their gumbo.

What is traditionally served with gumbo?

Rice. Preferably Lousianna grown rice, but there is always a bowl of freshly cooked white rice served with gumbo. You could be fancy and add some sliced green onions on top, but don’t forget the rice! Some people may have a light green salad, and some bread either French bread or some cornbread is recommended.

I love my reader’s suggestions, and I look forward to the ways they would modify or make gumbo, so please be sure to read the comments on this blog post to hear their suggestions. I know gumbo is a dish that many people are passionate about.

How to Make Gumbo with Chicken

You may add the bacon to the soup if desired.

Can this gumbo recipe be made ahead? If so, how is it best stored and reheated?

Gumbo is one of those soups that taste best the second or even third day so you can make it ahead. Let us talk about how we store, freeze, and reheat our gumbo.

How to reheat gumbo the right way.

Do not reheat gumbo in the microwave, soups, and stews are best reheated on the stovetop. So place your soup into a pot, and heat on low to medium-low heat until it gets warm.

Check out more of my easy chicken recipes and the best soup recipes here on CopyKat! 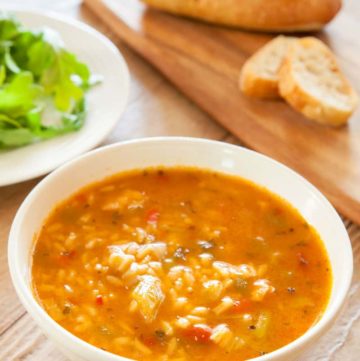