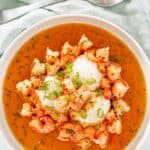 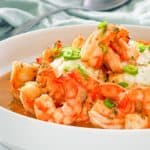 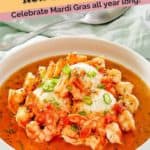 If you have never had Shrimp and Grits in New Orleans you are missing out. You can recreate this dish at home now.

If you have never had shrimp and grits in New Orleans, you are missing out – it’s one of those dishes that is simply perfect. Every time I go to New Orleans, I seek it out.

Next to beignets and po boys, I can’t think of a food that defines New Orleans for me as much as shrimp and grits.

The History of Shrimp and Grits

Grits are such a staple dish for southerners that the south is known as the “Grits Belt” and Georgia named grits as its state food. In fact, Georgia holds an annual Shrimp & Grits Festival every year.

If you don’t live in the South you may not have had this corn-based cereal in a magical way. What makes these grits amazing? By using half water and half whole milk the grits are creamy and flavorful.

When you prepare them with just water, the corn doesn’t open up as it does with milk.

The most famous barbecue shrimp is prepared at Pascale’s Manale. Barbecue shrimp are cooked in a Cajun-spiced garlic and beer marinade.

If you are ever in New Orleans, I would highly recommend going to this old school restaurant. White table cloths, attentive service, and spectacular food is the way to spend an evening.

Barbecue shrimp is shrimp that is cooked in a cajun-spiced, garlic, and beer marinade. Typically the cooking sauce is thin, but this one is different. This version creates a thick and savory sauce to enjoy with the grits.

How to Make Shrimp and Grits New Orleans Style

Be sure to check out more of my delicious main dishes and restaurant seafood recipes. 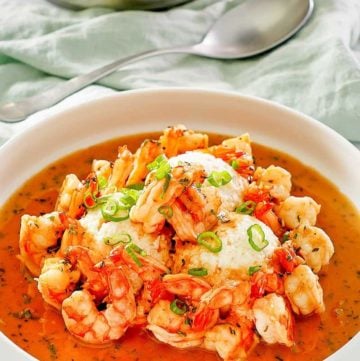