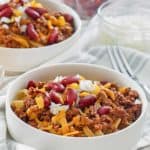 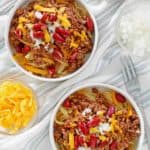 You may wonder what makes Cincinnati Chili so special. It definitely isn’t Texas-style chili. Special seasonings and a unique way to serve this chili makes this one amazingly good recipe.

One of my favorite ‘famous’ recipes is Cincinnati Chili. If you have never had it, you’re missing out on something that’s not only unusual but great! Several places in Cincinnati specialize in it (Goldstar and Skyline are two of the majors). If you don’t live in Cincinnati, this style of chili may be referred to as “that weird chili on spaghetti.” But in and around Cincinnati, it’s definitely a part of the lifestyle.

Cincinnati chili is a spicy/sweet chili of Greek origin, typically served over spaghetti and topped with cheese, onions, and beans. Cincinnati chili has a much thinner consistency to it than Texas Chili. Some say the secret is not browning the ground meat beforehand but letting it cook in the sauce.

You may wonder what makes Cincinnati Chili so special. In 1922, Macedonian immigrant brothers John and Tom Kiradjieff opened their Empress Chili Parlor. They took a typical Greek stew, seasoned it with middle-eastern spices, gave it an everyday handle – chili – and served it over spaghetti. Spaghetti chili has been popular ever since.

Why Is Cincinnati-Style Chili Unique?

Cincinnati chili distinguishes itself from other kinds of chili in three ways:

Four-Way Chili – Three-way with the addition of chopped onions.

When it comes to serving this chili, you have more choices:

Ultimately, Cincinnati Chili is many things at once. It’s chili, it’s pasta sauce, it’s hot dog sauce, it’s customizable, it’s American. It can be your new favorite thing if you let it.

You can make Cincinnati chili at home. You can buy packets of Cincinnati chili seasoning, but this copycat Cincinnati chili recipe made with good, fresh ingredients and spices is so much more flavorful. Your payoff for the extra effort comes when you tuck into a giant plate of grade-A comfort food.

Here’s what you need to make and serve the chili:

How to Make Cincinnati Chili

Be sure to check out more of my easy soup and chili recipes and the best ground beef recipes. 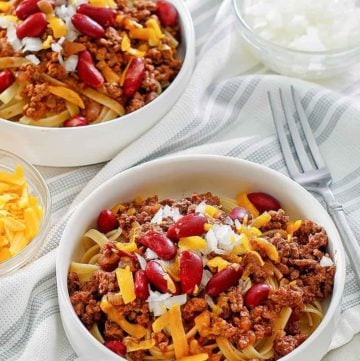