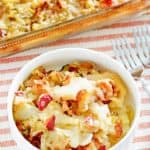 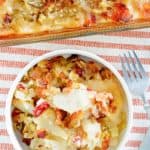 Hot German potato salad is the potato salad you have always longed for. Potatoes, bacon, onions, and more make a delicious side dish perfect for family dinners, potlucks, and holiday meals. 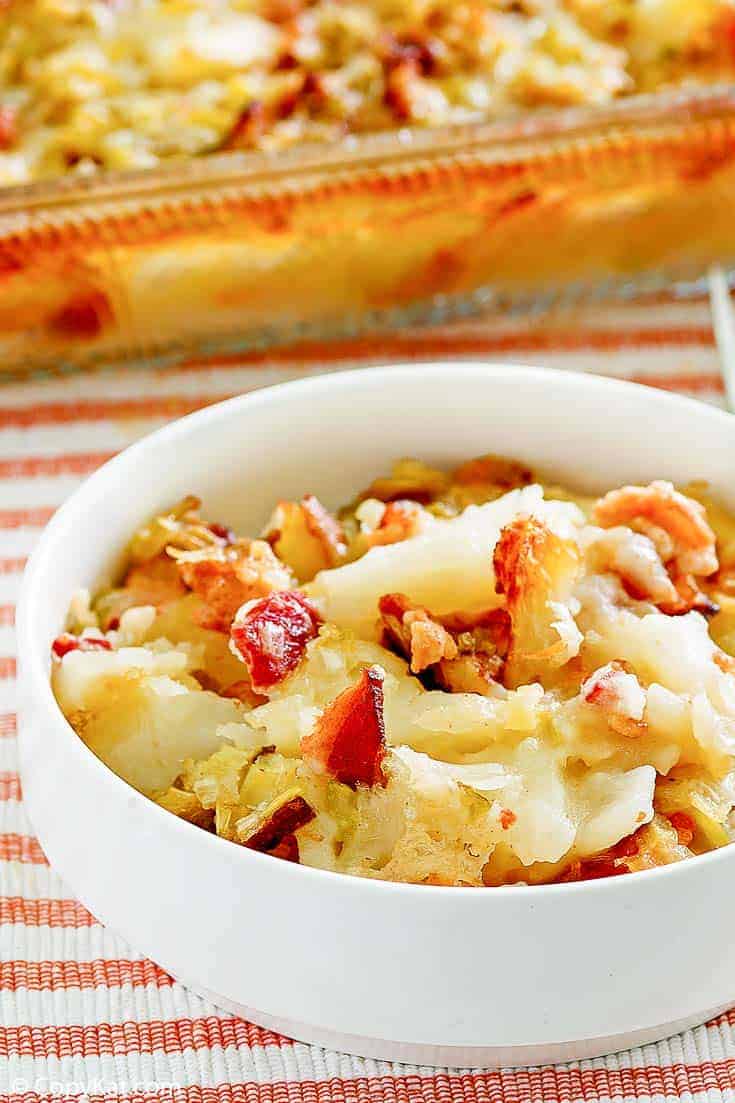 Cold potato salad, that creamy, mayo-based picnic and potluck supper standby, is probably the first thing you imagine when you hear the term ‘potato salad,’ but there is an alternative, German potato salad, and it’s nothing like its American cousin. This recipe for Hot German Potato Salad With Bacon is simple to make and provides a wonderful alternative to your ordinary side dishes. The next to you find yourself in need of a potato dish, why not give this one a try?

What Make German Potato Salad So Different and So Delicious?

The first big difference between German potato salad and the American version is that this recipe replaces the calorie and fat-laden mayonnaise found in ordinary potato salads with a dressing made from vinegar, sugar, water along with a touch of bacon fat. This dressing imparts a sweet and sour taste and rich mouthfeel that combines beautifully with the fluffy and mild potatoes.

But what makes German Potato Salad so versatile, and such a valuable recipe to know is that you can serve it hot, cold, or even room temperature. This gives you the flexibility to pair it with hot dishes or cold ones.

With so few ingredients, each one plays a huge part in the success of the recipe, but none so much as the type of potatoes you choose. Keep your potato salad from becoming too gummy by selecting a waxy potato variety. Waxy potatoes are the best choice due to their low amount of starch, which tends to turn into an unappetizing gloopy paste when boiled.

Traditionally, most home cooks prefer unpeeled red potatoes when they make German potato salad due to their thinner skin and unique flavor profile. Smaller varieties of red potatoes such as Superior, Kennebec, and Atlantic are ideal because they tend to be sweeter than larger types, like Red Bliss. If you don’t like, or your local supermarket doesn’t carry red potatoes, feel free to use any type of new potatoes, Pee-Wees, or even Fingerlings. Yukon Gold is a decent substitution, but you will want to peel them and get the best result by slightly uncorking them.

Don’t miss a single new recipe by following us on Twitter!

Here is what you need to make the potato salad: 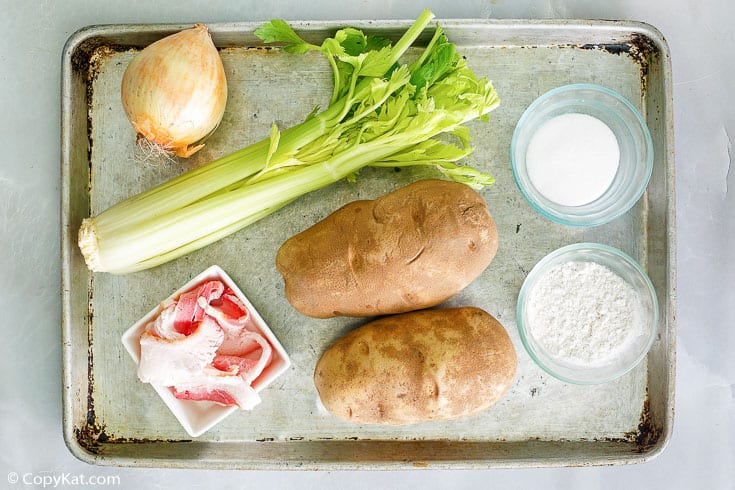 Slice cooked potatoes and place them in a baking dish. 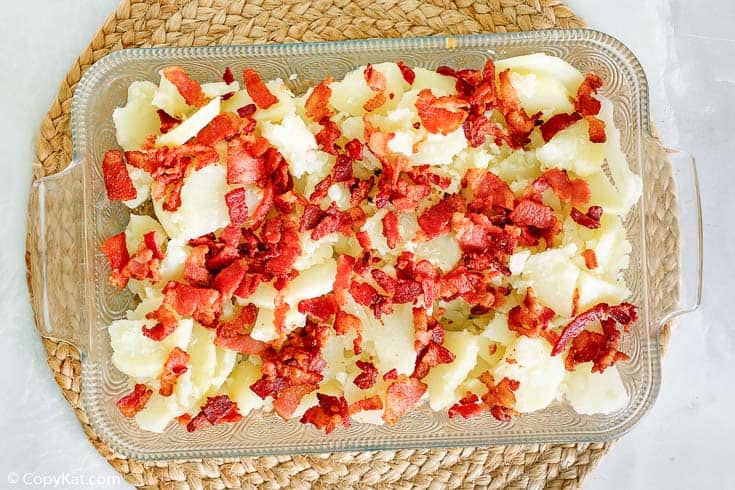 Add sugar, vinegar, and water. Bring to a boil. 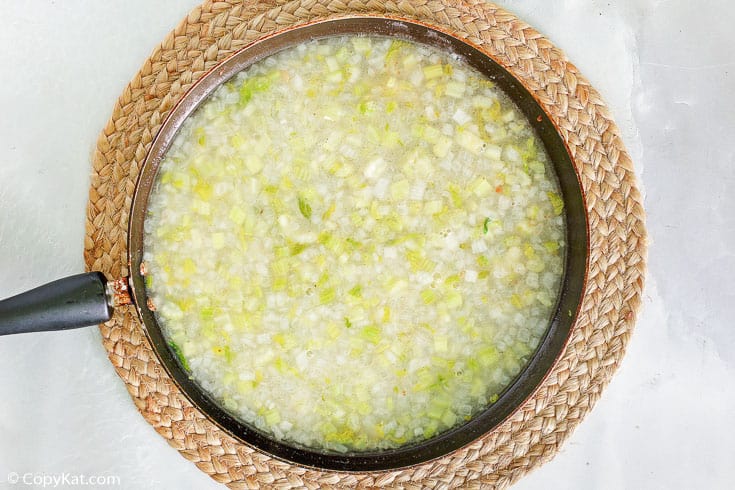 Pour sauce over potatoes and bacon.

Bake in the oven at 350 degrees for 30 minutes or put in a crock-pot until well heated. 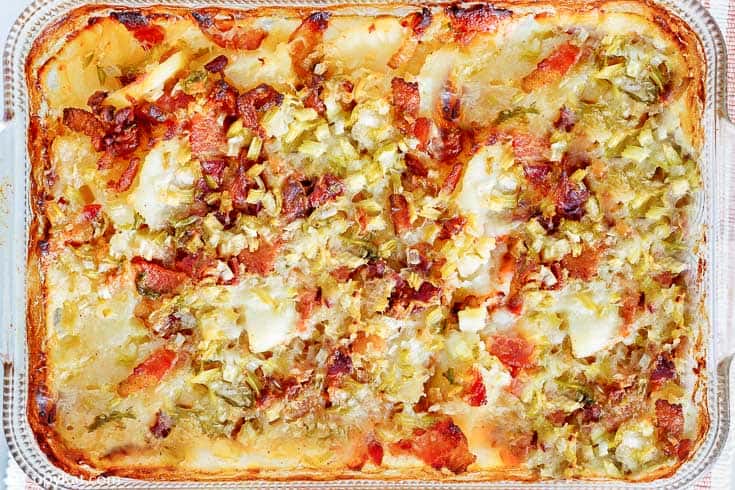 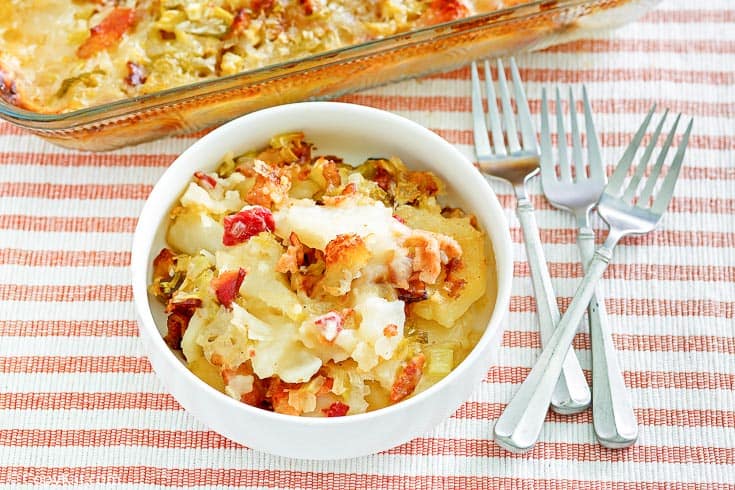 Be sure to check out more of my homemade salads and the best side dish recipes. 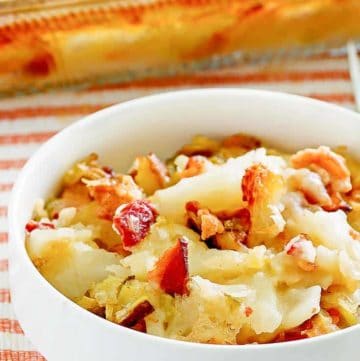