No one does Baked Potato Soup like Houlihans. They use instant mashed potato flakes for a special flare.

Houlihan’s baked potato soup is rich and creamy and hands down one of the best around. The secret to Houlihan’s soup is combining baked potatoes with instant potato flakes to create a perfect texture.

The original Houlihan’s opened up in Kansas City in 1972. It took over a site that was previously Tom Houlihan’s Men’s Wear. This is why the name Houlihan’s Old Place became the new restaurant’s name. In time the words Old Place were dropped and the restaurant became simply Houlihan’s.

Tom Houlihan, whose motto was there is no substitute for style, valued high quality above everything else. Houlihan’s has stayed true to those roots. The chain is known for its quality food and beverages, prepared on-site with fresh ingredients and served up with a style that’s uniquely Houlihan’s.

What is Chicken Base?

This Houlihan’s potato soup recipe uses chicken base. Chicken base is a highly concentrated stock with a deep rich taste.

Most supermarkets sell the chicken base (sometimes labeled chicken soup base) in the form of cubes or powder. You can generally find it in the same location as chicken bouillon cubes.

A popular brand is Better Than Boullion. You can even make your own and keep a supply in your freezer. Chicken base takes much longer to make than chicken stock, but the rich result is definitely worth your patience.

How to Make Chicken Base

Start with combining the basics for making chicken stock (whole chicken, onions, carrots, celery, garlic, water, salt, and pepper). Just let it all simmer away for several hours until the liquid is greatly reduced and the veggies have melted into the rich sauce. You can choose to strain it before use or placing it in your freezer.

How to Make Houlihan’s Potato Soup

Substitute chicken broth for some of the water for extra flavor.

Use evaporated milk instead of heavy cream and regular milk to cut down the calories.

Use flavored instant potato flakes for a flavor twist.

Double the spice ingredients and hot sauce for a spicier soup.

Add some ham for extra heartiness and flavor.

Can’t Get Enough of Potato Soup? Try these recipes!

Some of my favorite potato soup recipes include:

Check out more of my easy soup recipes and the best copycat restaurant recipes here on CopyKat! 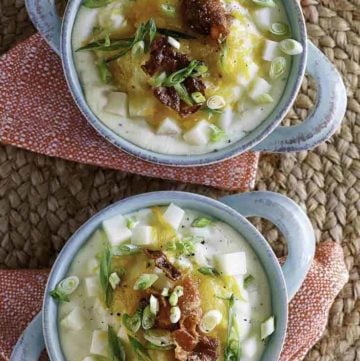 Substitute 2 cups chicken broth for 2 cups of water for more flavor. You would use 2 cups of chicken broth and 3 cups of water for a total of 5 cups of liquid. Use 2 cans of evaporated milk instead of heavy cream and regular milk (cuts down on calories from the heavy cream). Use flavored instant potato flakes for a different depth of flavor. For a spicier soup, double the spice ingredients. Add some ham to make the soup extra hearty and flavorful.