What makes the La Madeleine county potato soup so good? La Madeleine makes a delicious bowl of soup due to the leeks that are added to this potato soup recipe. Leeks had a mild flavor that taste like mild onions.

This soup uses onions in addition to the leeks, but the leeks really give this soup a very subtle flavor.

The soup starts out like many soups, you will saute the leeks and onions in butter until they are tender.

Cook the onions and leeks until the leeks change color and the onions become translucent.

Once the leeks have cooked to perfection you will want to add the chicken stock, thinly sliced potatoes, and thyme.

You will gently cook the potatoes so their starch breaks down slightly and gives the potato soup a creamy texture.

You can use fresh or dried thyme, but try not to omit the thyme because it adds richness to the flavor of this potato soup.

You will cook the potatoes for about 40 minutes.

If you have tried this soup before, the texture of this soup is a pureed soup. You can puree the soup by using an immersion blender, or you can carefully puree the soup in a standard blender.

After the soup is pureed, it should be brought to a boil, and a small amount of heavy cream should be added to the soup.

How to Serve Potato Soup just like La Madeleine

Check out more of my easy soup recipes and the best copycat fast food recipes here on CopyKat! 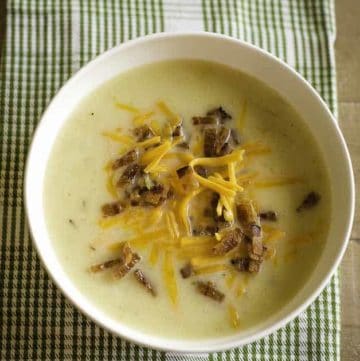 This recipe is from Executive Chef Remy Schaal of la Madeleine French Bakery and Cafe. Founded in Dallas in 1983, la Madeleine has many neighborhood cafes and bakeries in five states and Washington, D.C. Excellent potato soup! You may want to make modifications to this soup like: