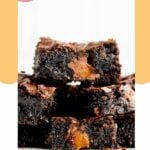 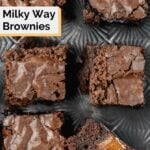 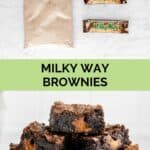 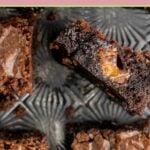 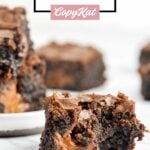 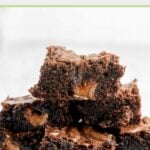 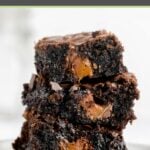 Transform ordinary boxed brownies into something extra special with the addition of Milky Way candy bars to the mix.

If you love Milky Way candy bars with their tasty combination of milk chocolate, creamy chocolate nougat, and caramel layer, these brownies will win you over with your first bite. Milky Way brownies are a must-try because they are rich, fudgy, and loaded with chocolate candy bar chunks.

Want to take brownies from ordinary to extraordinary? It’s easy to do with Milky Way stuffed brownies!

Why You Should Try This Milky Way Brownies Recipe

Of all the brownie recipes out there, these Milky Way brownies will rank right up at the top with your other favorites.

Your friends and family will rave over these candy bar brownies. They make the perfect dessert for taking to a potluck or giving as a special treat to a chocolate lover. This brownie recipe is also a great way to use leftover Halloween candy.

Are there any downsides to these Milky Way stuffed brownies? Definitely! First off, they are highly addictive. Then they must be eaten with a fork to avoid a yummy but gooey mess all over your hands!

It’s easy to make Milky Way brownies with brownie mix. Moreover, ordinary boxed brownie mix is transformed into something extra special with the addition of Milky Way candy bars. Here’s what you will need:

How to Make Milky Way Brownies

How to Make Milky Way Brownies

Making Milky Way brownies with brownie mix means these brownies come together in a flash. Here’s what you do:

Line the baking pan with parchment or foil, so it’s easy to lift the brownies out.

Be careful not to overbake because you want a nice fudgy brownie.

Keeping them chilled in the refrigerator until it’s time to cut them up will make slicing them up easier.

Use other candy bars to make Snicker brownies or 3 Musketeer brownies.

For more yumminess, drizzle the finished brownies with caramel sauce.

What to Serve With Milky Way Stuffed Brownies

They’re so rich that you will definitely need a big glass of milk to go with them. Of course, they are also good for your tea or coffee break.

Fudgy, thick brownies stuffed with candy bars make the ultimate dessert the whole family will love! Serve them with a scoop of vanilla ice cream.

How to Store Brownies

Store cut brownies in an airtight container at room temperature. They are best eaten within 1 to 2 days. They will last in the refrigerator for up to 4 days.

To freeze your brownies, place them in a well-sealed container in the freezer. They’ll be good for up to 2 months. When you want to enjoy some, just take them out and let them defrost.

Do you love brownies? Try These Recipes

Be sure to check out more easy brownies and great cake recipes.

This brownie recipe was generously donated by Gina McCaver, who said she was able to sell ten pans of them at her son’s Little League Fun Day. 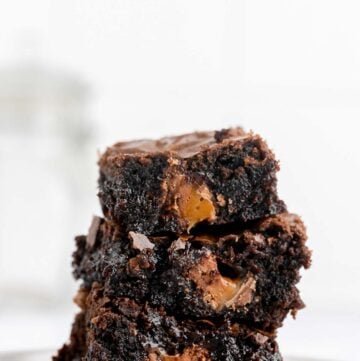