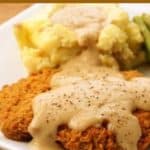 Beer Battered Chicken Fried Steak is a delicious twist to a classic Southern dish. The crispy crust has a special flavor and the steak is tender and juicy. 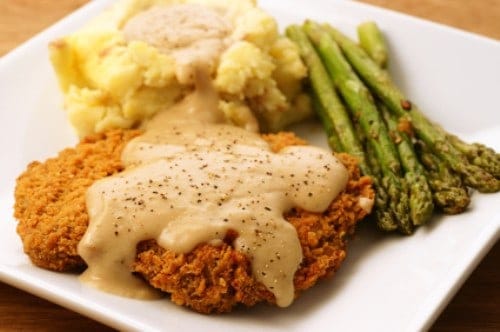 Bill called his version of chicken fried steak “Texas on a Half Shell”.

You know that when you step across the Texas border campaign, you are bound to need to try two dishes in my personal opinion. One is a good smokey barbeque brisket, and my second recommendation would be a Chicken Fried Steak.

Texas was settled by all sorts of people. This preparation may have derived from Wiener schnitzel. But instead of using veal, beef was pounded thin and tenderized. This type of meat preparation is popular.

Texans naturally fried many things because if you have lived through a Texas summer, you want to cook food quickly, so you don’t have to keep your ovens and stoves hot continually to cook a long meal. Deep frying enables you to cook quickly.

Chicken fried steak is often battered with buttermilk. What makes this recipe unique is the use of beer. This changes the flavor of the batter that encases the well-known chicken fried steak flavor we all love.

This is what you need to make beer-battered chicken fried steak:

Be sure to take a look at more favorite family recipes and easy desserts.