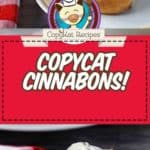 Cinnabons made by Cinnabon are some of the best cinnamon rolls around. These intensely flavored cinnamon buns blend together the perfect amount of cinnamon and sweet. They truly are buns from heaven!

Want to impress everyone with a special breakfast? You can make Cinnabon cinnamon rolls and it will make your guests and family so happy.

Don’t forget to serve this with plenty of the icing.

You won’t want to miss out on this recipe. Hot fresh cinnamon buns are the perfect addition to your weekend.

Who hasn’t been lured to the Cinnabon counter by the scent of freshly baked cinnamon rolls? Even at nearly 900 calories per bun, an occasional indulgence is almost impossible to resist.

From the gooey goodness of the cinnamon filling to the decadent frosting, few things compare to the absolute scrumptiousness of a Cinnabon. Yet, this Cinnabon copycat recipe comes incredibly close and saves you a trip to the mall.

How to Make Cinnabon Cinnamon Rolls

How To Store, Freeze, and Reheat Cinnabon Cinnamon Rolls

These copycat Cinnabons store beautifully in the fridge, freezer, or even on the counter. If you plan to eat the leftover cinnamon rolls soon, the best way to store them is in an airtight container on the counter. But if you don’t think you’ll finish them over the next couple of days, put them directly in the fridge or freezer.

To store cinnamon rolls in the fridge or freezer:

Cinnabon copy rolls will last three to four days in the fridge and up to two months in the freezer.

The best way to reheat a cinnamon roll is in the oven.

What Is the Secret to Cinnabon?

Everything about Cinnabon’s cinnamon rolls is over the top. From the size to the amount of filling and frosting. But the real secret to the unmistakable Cinnabon flavor is the unique type of cinnamon that Cinnabon uses for their cinnamon roll filling.

What Kind of Cinnamon Does Cinnabon Use?

Finding the best cinnamon for their buns wasn’t easy. It took Cinnabon’s taste testers a long time and a trip halfway around the world to discover the perfect type of cinnamon in the Korintjie region of West Sumatra.

This cinnamon from Indonesia has a more intense flavor, a more pungent aroma, and it is a little less sweet than other kinds of cinnamon such as Ceylon or Saigon. You can buy Korintjie cinnamon at the supermarket if you ever want to make cinnamon rolls from scratch.

Why Are Cinnabon Rolls So Gooey?

There is a little secret to how to make Cinnabon cinnamon rolls so deliciously sticky. Besides the Korintjie cinnamon and other specialty ingredients in the filling, Cinnabon team members are careful not to overcook the rolls.

By very slightly undercooking the buns, the company ensures you will never bite into a dry Cinnabon.

How Do You Make Canned Cinnamon Rolls Taste Like Cinnabon?

Check out more of my easy bread recipes and the best fast food recipes here on CopyKat! 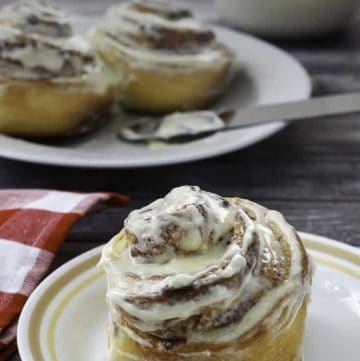