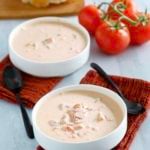 4B’s Tomato Soup is rich and creamy with diced tomatoes. This recipe will keep you from preparing anything in a can once you’ve tasted it. I was born and raised in Montana and this is the original recipe from the man himself, Mr. Hainline. My family knew him well. Enjoy!

After making Original 4-B’s Homemade Tomato Soup just once, you will not want to make soup from a can ever again. If you talk about tomato soup in Montana, many people will start reminiscing about 4-B’s legendary tomato soup.

This tomato soup is rich and creamy because it’s made with real butter, heavy cream, chicken broth, and canned tomatoes. I am a born and raised Montanan – and this is the original recipe from The Man himself – Mr. Hainline – who my family knew well. I ate this soup every chance I got.

This homemade cream of tomato soup has pieces of tomatoes instead of being smooth. It also has a lighter color than most creamy tomato soups. Butter and heavy cream give it a silky texture. All in all, it’s a luscious, soul-warming soup.

How to Make 4B’s Tomato Soup

The 4-B diners were established in 1947 in Montana by Bill Hainline. He named the restaurants after his family members whose names all began with “B” – himself, his wife Buddy, his son Bill Jr., and daughter Barbara.

The Hainline family created many memories for many generations of Montanans. The handful of 4-Bs closed in 2007 but they have since reopened under new ownership. The famous tomato soup is still on the menu.

The History of Tomatoes

Today, we eat tomatoes all the time. So, it’s surprising to learn that during early colonial times people wouldn’t put a tomato anywhere near their mouths. It was believed that tomatoes were poisonous and would turn your blood into acid. The colonists did grow tomatoes but purely for decoration.

However, you really can’t keep a good plant down, and over time the taste of the tomato won over the American public. The tomato also received a big boost from Thomas Jefferson who grew tomatoes in his garden at Monticello. Read more about the origin and history of tomatoes.

Check out more of my easy soup recipes and the best copycat restaurant recipes here on CopyCat! 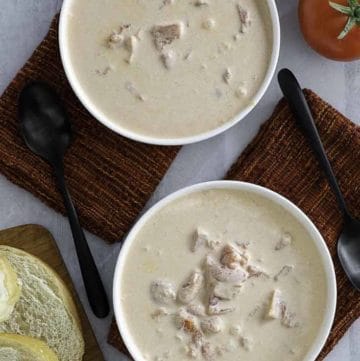