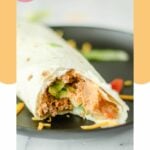 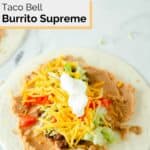 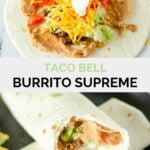 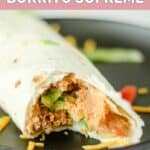 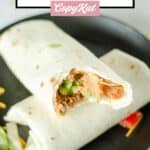 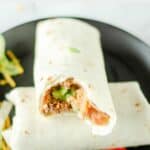 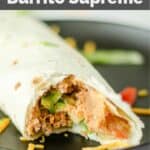 Be honest. You love Taco Bell, and you can’t get enough of the restaurant’s Supreme Burrito. It’s understandable. After all, it is hard to resist a fresh flour tortilla loaded with beef, beans, cheese, and veggies. Now you can make beef and bean burritos just like Taco Bell at home with this copycat recipe!

This is the perfect copycat recipe when craving a Taco Bell supreme burrito! Enjoy your Taco Bell cravings in less time than driving to Taco Bell.

What is in a Taco Bell Burrito Supreme?

The great thing about making your own homemade Taco Bell burrito supreme is that you can build them how you like!

The ingredient list may be longer than your average burrito, but that is only because the Supreme Burrito is so darn delicious. Let’s look at what goes into this restaurant-quality Taco Bell Beef Burrito Supreme recipe.

You can’t have a great Mexican-inspired meal without going a little overboard with the spice. But don’t even think about leaving any out. The spices are:

Chili Powder is not just one spice but a blend of many. While each chili powder blend is unique, most include cumin, oregano, paprika, garlic, onion, and cayenne powders.

Although the recipe calls for adding more spices, don’t think you can double up on the chili powder and be done with it. But you can use your favorite brand of chili powder or homemade chili powder for this recipe.

Ground Cumin has a bittersweet flavor that gives Tex-Mex dishes their characteristic taste.

Onion and Garlic Powders are dried and then ground. They have a more concentrated flavor than the fresh variety.

Dried Minced Onions are more intense than fresh onions, but they rehydrate with the spiced beef drippings and become pops of flavor in the burrito.

Additional Salts include both garlic salt and seasoning salt. Garlic salt is a mixture of about three parts garlic powder to one part table salt, while seasoning salt has, of course, salt, as well as other spices like paprika, onion powder, and ground red pepper. People tend to avoid using salt in their recipes but don’t. This recipe is not overly salty.

Paprika comes in two main varieties; Spanish and Hungarian. Spanish paprika has a smoky flavor, and it’s one that is better suited for making a Supreme Burrito.

Beef Bouillon Powder is not a spice, but its purpose in this recipe is to give the burrito a beefier taste. You can use your favorite brand.

What is masa harina? It is a corn flour made by finely grinding dried corn kernels treated with lime. Masa Harina comes in white, yellow, and blue varieties,

You can find masa harina in most of your grocery stores in the flour section or the ethnic cooking aisle. You can also find it at a local Mexican superstore.

If you don’t have any on hand, you could crush up a few corn tortilla chips and use those as a substitute.

Chuck roast is perfect because it has just the right amount of fat content and a bold beef taste. When you cook the ground chuck roast, you should expect a good bit of liquid to collect in the pan.

Don’t worry, the masa harina will thicken it up and turn it into a delectable sauce.

Refried beans are a Mexican staple made from spiced mashed beans fried in oil or lard. There are a ton of different varieties of refried beans, from traditional to vegan.

Traditional refried beans are usually made with lard and are the most flavorful, but use the ones you have on hand.

Add additional veggies. Top the filling with anything you like before rolling. Sweet or spicy peppers, avocados, or pickled red onions are delicious.

Is the Burrito Supreme Healthy?

Healthy is a fairly relative term. There are ways that you could make this recipe healthier, but I would not say that this is an unhealthy recipe.

A few ways to make it healthier would be to get low-sodium refried beans. You can also use corn or whole wheat tortillas instead of white flour. However, corn tortillas are not the best for burritos since the tortillas are quite fragile.

Another way would be to limit or eliminate the cheese from this recipe and use low-fat sour cream.

So, if your goal is for super healthy burritos, I suggest trying the options. But if you are looking for something tasty with a little bit of balance, then try the recipe as is and adjust it to your liking!

Is the Big Beef Burrito the Same as the Taco Bell Burrito Supreme?

Essentially, yes! While the two burritos aren’t the same by name, they have the same ingredients.

The big beef burrito has double the meat as Taco Bell burrito, just with double the meat! So, if you no longer offer it, then try just getting two of the burrito supremes and put them together.

When you make this burrito supreme recipe, double the meat, and you’ll have yourself a big beef burrito!

Either way, double meat, less meat, more cheese, less cheese, it’s all delicious. Just build it the way you want it and enjoy it!

Just How Popular is the Taco Bell Burrito Supreme?

You know how McDonald’s is known for its Big Mac? Well, consider this Taco Bell burrito the equivalent of the Big Mac.

The burrito supreme or supreme burrito (called both) is the most commonly ordered burrito on the Taco Bell menu. So I would say it is pretty popular! If you have not tried it before, now is the time!

Check out more of my easy Mexican food recipes and the best Taco Bell recipes here on CopyKat! 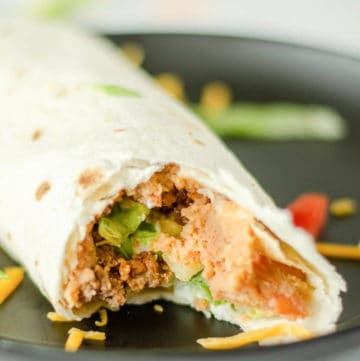