El Torito – It’s all about fresh and bold ingredients

If you are lucky to live in the Los Angeles area, you may be familiar with the El Torito restaurants. Outstanding food and they strive to give each guest a wonderful experience, it’s hard not to love this restaurant. Tableside preparation of many of their most-loved dishes makes for a fun evening.

Many chicken tortilla soups are rather bland and do not have much in them. This soup is perfect because it has fresh zucchini, squash, carrots, potatoes, and more.

I love that this soup is really packed full of fresh vegetables. It also has fresh cilantro and fresh mint to give a brightness to the soup.

This much-loved soup may have had its origin in Mexico City. Like many other dishes, as this dish made its way north from Mexico the soup changed a bit.

Near Mexico City, the soup was a chicken soup with no tomatoes. It always contained chicken and tortillas, but in California, tomatoes and beans can be found in the soup.

No matter if you have the original style of soup or one that was developed later, you are going to sink your spoon into a bowl of delicious soup.

This soup is loaded with chicken, vegetables, and Mexican spices. While the list of what you need looks extensive, you’ll know it’s worth it once you have a taste of this incredible soup.

For me, soups that have a Tex-Mex or inspiration from Mexico means that you have a variety of options for toppings. Here are some of my favorite toppings.

What is the difference between pozole and tortilla soup?

There are several differences between pozole and tortilla soup. Pozole is more of a stew and made with pork. Pozole is garnished with thinly sliced cabbage. Pozole soup contains hominy. Chicken tortilla soup is a thiner soup made with chicken, and it is topped with crispy tortilla chips, cheese, and sometimes sour cream.

Why is it called tortilla soup?

This soup is made with a rich and delicious chicken broth and vegetables. This may have been served to use up tortillas past their prime. This soup lends itself to being topped with crispy tortilla strips.

Absolutely, this soup has it’s orgins in the state of Tlaxcala. This area is known for being where corn is grown. This state is known for the corn tortillas. This soup also comes from this state in Mexico.

Check out more of my easy soup recipes and the best Mexican food recipes here on CopyKat! 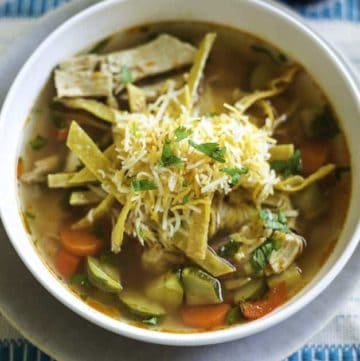