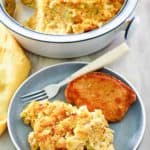 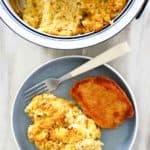 This true southern cornbread dressing recipe has been in my family for several generations. It does take some time to make, but it is well worth it.

A turkey dinner just isn’t complete without a heaping mound of carbs to sop up all that extra gravy. In New England, folks may argue about who makes the best oyster stuffing, but below the Mason-Dixon line, it is all about Southern Cornbread Dressing. This cornbread dressing recipe is a true classic that has graced the dining room tables in the South for generations. Sure, Southern Cornbread Dressing is at home next to your Thanksgiving turkey, but it works just as well with a roasted chicken, so there isn’t any excuse not to try it tonight.

What’s the Difference Between Stuffing and Dressing?

This confusion comes from the fact that somewhere along the line, we started making stuffing the wrong way. Instead of putting the mixture of seasoned bread where it belongs, inside the turkey’s cavity, we decided it was better to cook the stuffing on its own. Whether this was due to our increased fear of food poisoning from undercooked turkey or just because a particular company marketed an instant ‘stuffing’ you could cook on top of the stove; doesn’t matter much. The days of the ‘stuffed’ bird were pretty much over. Today most people cook ‘stuffing’ on the stovetop or in the oven. Little do most of them know that they are making isn’t really stuffing at all, but a dressing.

Dressings have always been prepared separately from the bird and used as a side dish to ‘dress up’ the plate. So, you see that modern stuffing and traditional cornbread dressing is pretty much the same thing. But, if you or your guests are somehow averse to enjoying a Thanksgiving meal without any “stuffing,” go ahead and call this side a cornbread stuffing. No one is going to mind.

Making Sure the Dressing is Fully Cooked

This cornbread dressing recipe may take a little longer to put together than a traditional stuffing, but it isn’t complicated. There is just one thing you need to get right, and that is when you remove it out of the oven. A perfect Southern Cornbread Dressing has a golden brown top and a moist interior. But you want to make sure that there isn’t any extra liquid sloshing around on the bottom of the casserole dish. Use a chopstick to poke a small hole in the center of the cornbread dressing, and the tip of the chopstick should come out dry.

Find out what we are up to these days by following us on Facebook.

Here’s a list of what you need to make cornbread dressing:

How to Make Southern Cornbread Dressing

Taste the mixture before baking. You may need to add some onion powder, more bouillon, salt, or black pepper.

Be sure to check out more of my easy Thanksgiving recipes and the best side dish recipes to make throughout the year.

Thanks to KellyK for submitting this recipe. 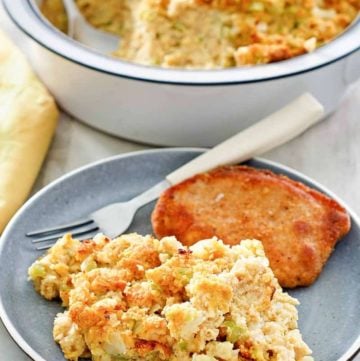 Southern Cornbread Dressing is a traditional Thanksgiving side dish, but you can make it any time of the year. Great with turkey, pork chops, and ham.
3.5 from 4 votes
Print Pin Rate Add to Collection Go to Collections
Course: Side Dish
Cuisine: American
Keyword: Cornbread Dressing, Stuffing
Servings: 10
Calories: 452kcal
Author: Stephanie Manley

The consistency should be soft (a little bit soupy), and not stiff. If the consistency is too stiff, add more soup. Also, taste to make sure you have enough onion, pepper, etc. You may need to add some onion powder, more bouillon, or black pepper. 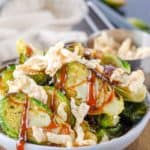