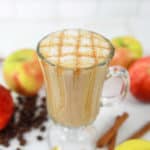 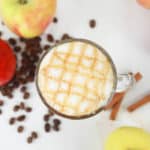 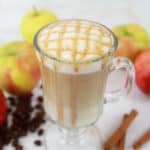 As the weather turns chilly, there’s nothing quite like a hot beverage to warm your bones. And when you add a kick of caffeine, like in this Starbucks Apple Crisp Macchiato, well, so much the better!

This perfect autumn coffee-based drink combines the tartness of apples with the sweetness of brown sugar for a treat that might give the seasonal favorite, Pumpkin Spice Latte, a good run for its money!

Why not decide for yourself and whip up a few of these Apple Crisp Macchiatos to see which you prefer?

When you notice the first few red and orange leaves starting to appear on the trees, you know it won’t be long before the tables at your local farmers’ market are heavy with freshly picked apples and fresh-pressed apple juice. This coffee drink captures all the magic of the season with its one-of-kind apple juice syrup.

Making the apple brown sugar syrup Starbucks uses in this drink isn’t difficult, but it does take time.

Once the mixture comes to a boil, make sure to turn the heat down until it’s barely simmering, and don’t forget to stir often to keep it from burning. Let it cool entirely off the heat before straining to allow all the spices to release their flavors into the syrup.

Don’t be confused when you hear the term macchiato used to describe this beverage. That’s just what the folks at Starbucks call it. While an authentic macchiato has less milk, with only a teaspoon or two of foam to ‘mark’ the espresso, this version has a lot more.

Think of this drink like a latte to get the proportions correct, and everything will turn out fine.

There are three components to this recipe. You’ll need to make an apple syrup, brown sugar syrup, and then the macchiato. Here are the recipe steps:

Variations and Substitutions for this Starbucks Apple Crisp Macchiato Recipe

Don’t skip this recipe just because you don’t own an espresso maker! Instant espresso powder, Italian-style Moka coffee, or even extra-strong drip coffee are all good alternatives.

For those who don’t want to drink cow’s milk, use your favorite non-dairy milk substitute. Oat milk is delicious in this recipe.

You can use apple cider for a more intense apple flavor.

Three Different Methods for Frothing Milk Without a Milk Frother

Milk frothers are inexpensive, and they do an excellent job at frothing milk for those without an espresso machine, but there are other ways to prepare the milk with mixed results:

Pull the plunger up and press down slowly, keeping the metal filter portion submerged in the milk. Repeat until bubbles begin to form in the milk.

It only takes a few seconds to create a decent quality froth with medium bubbles.

If you have the time and the upper body strength, whisking is a good way to create a froth for the Starbucks Apple Macchiato.

Since it can take anywhere from 3 to 5 minutes, try whisking while warming the milk in a small saucepan on the stove over medium-low heat.

Use a small hand whisk to stir vigorously, but make sure never to allow the milk to come to a simmer and watch out for splattering the milk.

Although the jar method produces rather large and short-lived foam, it is by far the easiest solution for folks who don’t have a dedicated frother.

Just pour warm milk into a jar (or any large container) with a well-fitting and waterproof lid. Cover and shake until bubbles start to appear.

The Jar Method won’t make your drink pretty, but it won’t affect its flavor.

Can you store this macchiato for later?

While you should try to drink a Starbucks Apple Crisp Macchiato as soon as possible, you certainly can keep the two syrups in the fridge.

Just store the Starbucks apple cinnamon syrup and the brown sugar syrup in separate covered containers and use them up within a week. 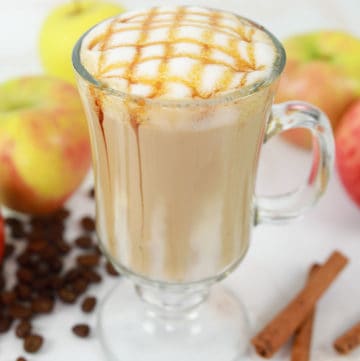 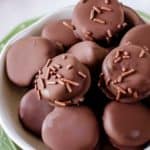 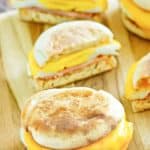 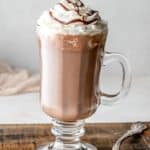 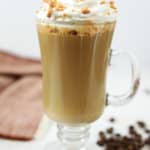