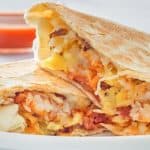 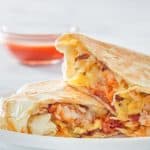 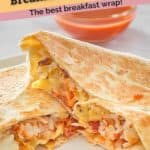 Taco Bell Breakfast Crunchwrap is a Taco Bell breakfast item you have got to try. Part breakfast quesadilla, part breakfast heaven, it can be all yours.

Taco Bell is a favorite late-night hotspot for cheap and quick grub, But if you’re someone who has to skip the nightlife because you have to work a job in the morning, you are pretty much out of luck. Most Taco Bells restaurants don’t open their doors until at least midmorning, and that’s a shame because there is one item on the menu, the Taco Bell Breakfast Crunchwrap that is the ultimate breakfast fiesta.

Never had it? Well, think of it as a Taco Bell Breakfast Burrito taken to a higher plane of existence. It comes loaded with eggs, cheese, bacon, and hash browns, all spiced with Taco Bell sauce and sandwiched between two crunchy tortillas! You shouldn’t have to wait to chow down on this delicious dish. Don’t worry. The recipe below will let you make a breakfast Crunchwrap whenever you get a craving for one!

It All Starts with Perfect Scrambled Eggs

All of the other components of the dish you can make ahead of time, but you should cook the eggs fresh for the best results. Cooking great eggs is deceiving complex. It is pretty easy to cook decent ones, but who wants to settle for just okay eggs when you can make outstanding eggs with a bit of technique.

After cooking the eggs, it is pretty simple to assemble and make the rest of the Taco Bell Breakfast Crunchwrap.

See how we make more Taco Bell food at home on YouTube!

About the Breakfast Crunchwrap

The breakfast crunchwrap comes in two different ways. You can get it with either bacon or sausage. I personally love the Taco Bell Breakfast Crunchwrap with bacon. If you are a vegetarian, you could make one without meat.

Inside of this Crunchwrap, you will find crispy hash browns, bacon or sausage, cheese, and some taco sauce. A flour tortilla is wrapped and cooked on a griddle until the tortilla just begins to brown. These flavors go so well together, you won’t be disappointed.

If you do have to make a stop in the morning and grab breakfast, I promise this is something you will want to get for breakfast.

When you make a crunchwrap at home you may be able to do several at once so you can heat them up before you go to work. I love to cook up a few meals on the weekends so I can save some money during the week because I don’t have to eat out.

How to Make a Breakfast Crunchwrap

Make a batch of homemade taco sauce. The sauce is easy to make and keeps in your refrigerator for about two weeks.

I also like to bake bacon for this recipe. If you don’t want to do that, you could use some real bacon bits.

Can’t get enough of Taco Bell? Check out these copycat recipes 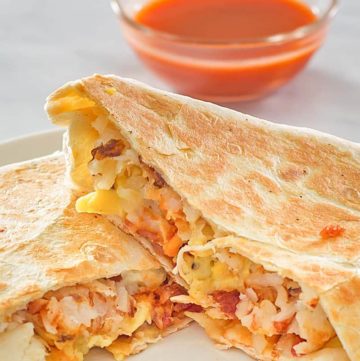