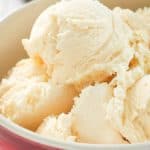 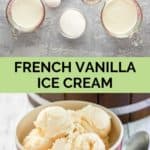 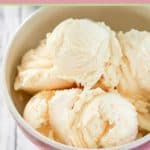 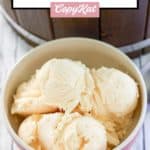 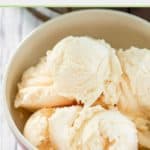 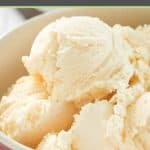 You can make your own ice cream any time of year. This French Vanilla ice cream is a delicious, creamy, and rich ice cream to try. This recipe is tried and true and you will love the results. Even if you have never made ice cream before, you should give this recipe a try – it is super simple to make!

Some of the machines weren’t electric and we had to turn those ourselves. I have always missed those days as an adult, it was the big party to go to.

What is French Vanilla Ice Cream?

French Vanilla Ice Cream is an old-fashioned frozen treat to enjoy any time of the year. It’s great alone, with toppings, or served with cake.

Why French Vanilla Ice Cream Is So Good

Some folks say vanilla ice cream is just too basic to be anyone’s favorite flavor, but they’re wrong. Homemade french vanilla ice cream may not be loaded with mix-ins, but it’s tough to beat for those who can appreciate the subtle, refined taste and creamy texture.

Although the two flavors are similar in name, they are not the same. French vanilla has nothing to do with the kind of vanilla used to make it but refers to a style of ice cream in France than includes egg yolks.

That slight difference has a significant effect on how the ice cream tastes and how it feels when you eat it.

If you love ice cream, investing in a proper ice cream maker and learning how to make your own will save you a lot of money in the long run.

This French Vanilla Ice Cream recipe is excellent for someone new to making ice cream. While most ice cream recipes require cooking the base to make a custard before churning, this recipe lets you skip that step, saving time and preventing you from turning on the stove.

You can find several whipping creams on supermarket shelves, but the kind you want for this recipe is the regular version.

Consuming raw eggs can be dangerous. If you are concerned about using raw eggs in the ice cream, you can find pasteurized eggs in some stores.

How to Make the Best French Vanilla Ice Cream

After all your hard work, you don’t want to cover up the subtle flavors of french vanilla with sauces or too many toppings. If you must add a garnish, try sprinkling crushed walnuts on top or enjoy with a vanilla wafer.

Just in case you want to drizzle on some toppings, here are some suggestions:

Some versions of french vanilla use real vanilla seeds for flavor and the slightly gritty texture the seeds give the ice cream.

Recipes using vanilla beans require heating on the stove to draw out as much flavor as possible. If you want to use vanilla seeds instead of vanilla extract in this recipe, you can try the following:

Storing homemade ice cream is a little more complicated than you might think. Commercial manufacturers use stabilizers and blast chillers to prevent ice crystals from forming on their ice cream. Home ice makers don’t have those options.

There are a few storage tricks you can use to keep your ice cream as creamy and delicious as possible:

Check out more of my easy ice cream recipes and the best recipes for summer here on CopyKat!

This recipe is from Ben and Jerry’s Homemade Ice Cream and Dessert cookbook. You can find many more of their recipes in the book. 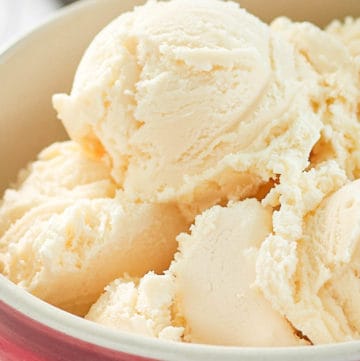