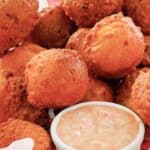 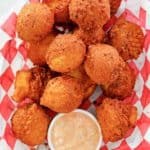 These deep-fried cornmeal hush puppies are crispy and perfect when cooking fried fish. Chopped onions are added for extra flavor to these hush puppies.

If you’re digging into fried shrimp or catfish at a seafood restaurant, odds are you’ll also get those round golden brown fried nuggets called hush puppies. Traditionally made from thick cornmeal batter, they’re shaped into balls, fingers, or even long squiggly strands and dropped into a deep fryer.

The perfect hush puppy is crisp and crunchy on the outside and soft and chewy in the middle. They’re iconic and delicious.

What is a Hushpuppy?

Whether you call them hushpuppies or hush puppies, they are a type of fritter made from cornmeal, eggs, and seasoning brought together into a thick batter with a liquid.

Hush puppies are famous in the South, where people serve them as an accompaniment to fried fish or smoked meat. But with their crunchy exterior and lightly airy interior, these cornmeal fritters are a versatile side dish worth trying.

Why This is the Best Recipe for Homemade Hush Puppies

On the hush puppy complexity scale, this recipe is somewhere in the middle. The recipe is not basic and bland, but it doesn’t go over the top with ingredients.

The hushpuppies taste lovely as they are, but you can easily tweak the recipe if you want to get a bit more creative.

No one has any idea of their true origin. Which hasn’t stopped people coming up with some inventive and entertaining explanations.

Hush Up, Dogs!: Imagine a southern fisherman frying up his catch and his hound dawgs drooling and yapping away at the sight. To keep them quiet, the cook fried up strips of dough and tossed them to the “puppies” to hush them up.

It Was Back in the War: The story goes that confederate soldiers cooking their dinners around the campfire thought they heard the enemy coming. So, they threw their barking dogs some fried cornmeal and issued the soldierly command “hush puppies!”

Fried Salamanders: This bizarre legend has it that Cajuns in Southern Louisiana were fond of digging up mud puppies (salamanders) dipping them in a batter and deep-frying them. However, dining on salamanders was considered low class, so the eaters kept hush about it.

Is Any of This True?

It seems that hush puppies might have originated with red horse bread. Red Horse was a common species of fish served at fish fries.

Red Horse bread was part of the repertoire of a famous cook named Romeo Govan who ran a clubhouse where people came during fishing season. The bread was made by mixing cornmeal with egg, salt, and water. Gobs of this mixture were then dropped into the hot lard in which the fish had been fried.

One reporter wrote:
“This was a new bread to the writer, and so delicious, that I beg lovers of the finny tribe to try some.”

It must be noted that this history still doesn’t explain the change of name from red horse bread to hush puppy so you may prefer to entertain your children with the other stories.

What Are Hush Puppies Made Of?

How to Make Hush Puppies

There are only a few simple steps for making this delicious fried bread:

You can easily add your personal spin to this hush puppies recipe. Here are just a few suggestions:

What to Serve Hush Puppies With

Hush puppies are perfect at a fish fry, but they go well with other types of food as well. Serve them instead of cornbread with baked beans or chili. Fry up a bunch when you make chicken wings.

Here are some recipes to try:

What to Dip Hush Puppies In

Dip them in any of these sauces for a delicious snack:

How To Store Hush Puppies

Keep leftover hush puppies in a plastic bag between layers of paper towels in the fridge for up to three days.

To store for longer, lay the room temperature hush puppies on a baking tray and pop the tray into the freezer until the hush puppies are fully frozen. Transfer them to an airtight container.

Hush puppies will last in the freezer for up to three months.

How to Reheat Hush Puppies

This recipe for hush puppies reheats from either frozen or thawed beautifully in the oven:

Another fantastic way to reheat your hush puppies is in an air fryer.

To reheat hush puppies in the air fryer:

Check out more of my easy bread recipes and the best budget-friendly recipes here on CopyKat! 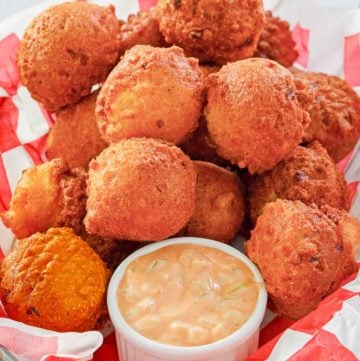